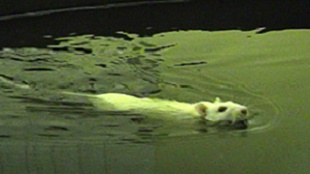 WIKIMEDIA, JEPOIRRIER (FLICKR)A muscle gene activated by physical exercise protects the brains of mice from stress-induced depression, according to results published today (September 25) in Cell. Triggering this gene, PGC-1α1, blocks the transport of a metabolite that, within the brain, may cause inflammation that leads to depression. Understanding the biochemical reason why exercise improves symptoms in some patients with depression “opens up a very interesting therapeutic future,” said study coauthor Jorge Ruas of the Karolinska Institute in Sweden.

Previous studies have shown that physical exercise can prevent or improve the condition of many diseases, ranging from diabetes and obesity to mood disorders and depression. But whether the improvement stems from cardiovascular effects, muscle conditioning, or psychosocial benefits has been unclear.

In 2012, Ruas and his colleagues found that different forms of the skeletal muscle PGC-1α gene responded to different kinds of exercise. The gene could be transcribed from...

In the new study, Ruas and his coauthors subjected transgenic PGC-1α1-expressing mice and control animals to chronic mild stress to mimic one trigger of human depression. After five weeks, the control animals showed behavioral signs of anhedonia and despair, such as failing to exert themselves during a forced swim test. Their brains also revealed changes that included decreased synaptic plasticity, imbalances in glutamate metabolism, and lower levels of neurotrophic factors. The transgenic mice, however, showed neither behavioral nor anatomical signs of depression.

Digging deeper, they found that the PGC-1α1 gene controls a step in muscle metabolism of tryptophan where one metabolite, kynurenine (KYN), is converted to a different form, kynurenic acid (KA). Previous studies have linked KYN within the brain to inflammation, which is correlated to depression and schizophrenia-like symptoms. Outside the brain, the liver converts more tryptophan to KYN in times of stress, and KYN can cross the blood-brain barrier to trigger an inflammatory response.

In mouse muscle, increased PGC-1α1 levels—such as those induced by exercise—converted more KYN to KA, which cannot cross the blood-brain barrier. To test whether the depression-like symptoms seen in their experiments were indeed mediated by KYN, the researchers administered KYN to both control and transgenic mice; only the former group showed gene expression and behavioral changes linked to depression.

The conversion of KYN to KA by PGC-1α1 may be a key metabolic step in linking stress-induced inflammation and depression, the results suggest.

“It is important to remember that ‘stress’ is not only having a stressful everyday life —but outside events that activates [the cellular] stress-response,” coauthor Maria Lindskog told The Scientist in an e-mail.

When control mice were put through an eight-week exercise regimen, skeletal muscle expression of the PGC-1α1 gene increased. Similar results were seen in healthy human adults after a three-week training program. Collectively, the results show that “exercised muscle acquires a detoxification role in stressful conditions that have not been described before,” said Ruas. “I don’t think anyone had previously thought of correlating muscle changes with inflammation [in the brain].”

“This is a very interesting study about the non-pharmacologic mechanisms of antidepressant action, a topic that’s not addressed very much,” said neuroscientist Michael Lutter of the University of Iowa who was not involved in the work.

Behavioral immunologist Andrew Miller of Emory University added that exercise, or drugs that target PGC-1α1, would likely be effective only in depressed patients who also had signs of inflammation and elevated KYN, such as those with early life stress, obesity, cancer, or other diseases. In physically healthy patients, brain levels of KYN are not clearly correlated to symptoms of depression. “Exercise may be especially relevant to those depressed patients who have increased inflammation,” said Miller, who was not involved with this study. These results “allow us to target therapies like exercise to select populations of individuals,” he added.

“Finding that certain aspects of muscle metabolism may be associated with the development of mood disorders adds to [an emerging] theme,” said Lutter. “There’s a much more intimate connection between the mind and body than was previously appreciated.”