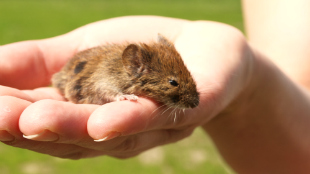 WIKIMEDIA, WIKI GH! Systemically blocking the mechanistic target of rapamycin (mTOR) protein with an immunosuppressant drug has been shown to increase longevity in mice. Taking a new approach, researchers show in Cell Reports today (August 29) that cutting down the levels of mTOR through a genetic alteration also extends mouse lifespan, and delays the appearance of biomarkers of aging. “It’s clear that in many different model organisms, either pharmacologically or genetically, perturbations of this pathway extend lifespan,” said David Sabatini, a member of the Whitehead Institute for Biomedical Research in Cambridge, Mass., who was not involved in the study.

MTOR is a kinase involved in myriad cellular processes, from autophagy to protein synthesis. Genetic studies of TOR in other organisms, such as yeast and flies, have implicated a role for the enzyme in lifespan. In mammals, however, mTOR is required for survival, making a knockout mouse model unfeasible. So...

All else being equal, the researchers found that normal mice typically lived 26 months, while those with less mTOR survived around 30 months. Finkel said the increase in lifespan was greater than other researchers have seen using the immunosuppressant rapamycin to inhibit mTOR. It’s possible that having mTOR reduced beginning in the womb, rather than at middle age, could explain the disparity. Additionally, this new mutant affected the levels of both forms of mTOR—mTORC1 and mTORC2 complexes—rather than preferentially impacting one, as rapamycin would.

“One of the most important things they did here was they looked at the molecular phenotypes of aging. They didn’t just look at lifespan, they looked at outputs,” Sabatini told The Scientist. Among the mutant mice, Finkel’s group found reduced levels of p16, nitrotyrosine staining, and polyubiquitin proteins—all indicators of aged tissues—compared to wild-type animals. The researchers also observed phenotypic differences between the two, including better balance, memory, and gait among the mice with lower mTOR levels.

The mutant mice did not have a uniformly extended “healthspan,” however. As they aged, these mice had less bone volume and more infections than their counterparts. “The conclusion we’d like to draw is that aging is not regulated in all tissues by the same mechanism. Tissues and organs can age independently of each other and independently of the overall organism, too,” Finkel said.

Joseph Baur, an aging researcher at the University of Pennsylvania who did not participate in the research, noted that this was the first study to use a genetically induced reduction of mTOR resulting in lifespan extension among both sexes of mice. Previous work had shown that among mice lacking one copy of the mTOR gene, only females experienced the lifespan benefit. But in Finkel’s study, both male and female mutant animals lived longer. “In that sense, [the study is] really important,” Baur said.

In their paper, the authors noted that lifespan of their control mice “is on the short end of the published spectrum.” While that’s an important limitation to consider, Baur said the longevity seen among the mutant mice doesn’t appear to have resulted from simply fixing a health problem among the control mice, because those animals seemed healthy and were reasonably long-lived.

How mTOR might mediate longevity in animals is unclear. Dominic Withers at the MRC Clinical Sciences Centre, Imperial College London, said that aging in these mutant mice is likely delayed by a combination of effects involving mTOR inhibition. “Reduction of mTOR signaling may mimic the effects of dietary restriction—which in itself is not fully explained as a mechanism,” Withers told The Scientist in an email. In addition, “alterations in a range of cellular process such as autophagy, inflammation, and protein synthesis are all implicated as being involved in aging, and mTOR signaling regulates these events.”

Finkel said he’s particularly interested in how mTOR deficiency affects autophagy. Perhaps cells “get rid of cellular garbage at a faster rate. . . . That's our best guess, but it’s a complete guess,” he told The Scientist.

MTOR inhibition is also related to tumor suppression. “The question that hasn’t been answered yet is whether this lifespan extension is really due to slowing aging, or whether it’s mostly due to a direct inhibition on cancers,” said Richard Miller, a professor at the University of Michigan who was not involved in the study. Although Finkel’s results don’t entirely resolve that issue, Miller said they support the idea that mTOR affects aging itself, and not just by reducing the incidence of a common killer.