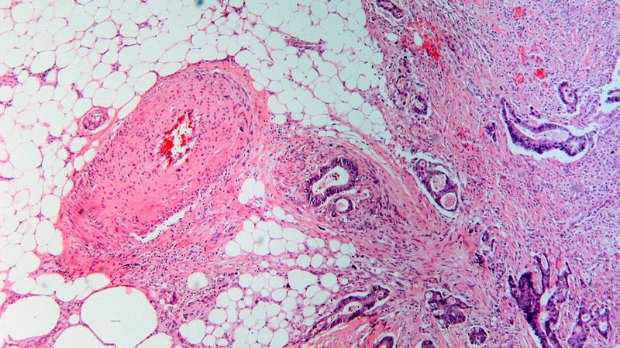 WIKIMEDIA, PATHODozens of genetic mutations are known to facilitate cancer progression, but metastasis doesn’t appear to be controlled by additional changes to the genome. A study of hundreds of colorectal cancer patients published in Science Translational Medicine this week (February 24) found patterns of these “driver” mutations are similar between primary tumors and metastatic ones.

Instead, the researchers discovered a link between metastasis and several immune-related changes, including alterations in gene expression, decreased abundance of cytotoxic lymphocytes, and a decline in lymphatic vessels.

“Areas that have been a focus of great interest in the field for many years are really not the primary reasons for metastasis in clinical course,” Edgar Engleman, who researches immunoncology at Stanford University but was not part of this study, told The Scientist. “And in fact, the finger is pointing again and again and again to the immune response.”

Scanning for mutations in 48 cancer-related genes came up short—none were more frequent among patients with metastatic disease, supporting the findings of a 2008 PNAS study. Most of these genes were also expressed similarly between metastatic and primary tumors. The mutational spectrum “is probably not explaining why these cancers progress” to metastasis, said Raymond DuBois, the executive director of the Biodesign Institute at Arizona State University, though he noted that “those changes are important to get to the point where [metastatic] progression can occur.”

“Clearly, the tumor cell [genetic] alterations did not show any relationship with the fact that the tumor developed metastasis,” Galon told The Scientist. “The most striking observation was, in fact, the opposite.” The only mutation that stood out correlated with an absence of tumor spread.

But while the researchers found no changes in mutation patterns to explain a tumor’s metastatic behavior, they did find hundreds of genes that were expressed differently between primary and metastatic tumors. Genes downregulated in metastatic patients included those involved in the immune system, while upregulated genes had roles in translation, endocytosis, and other cellular activities.

A 2014 study found transcript levels in tumors don’t necessarily predict protein levels, so interpreting these results might be limited, DuBois told The Scientist. But Galon’s group followed up on a couple of leads from the transcriptome analysis and uncovered evidence to support the immune system’s role in metastasis.

Scrutinizing the tumor tissue from patients, the researchers found a decline in the abundance of cytotoxic T cells among metastatic samples. Patients whose cancer had not yet spread but was poised to—with tumor cells present in blood vessels—also had low levels of the immune cells. This suggests the change is a cause, rather than a consequence, of metastasis, Galon said. “And if these T cells are activated at early stages of disease [through immunotherapy], this could potentially prevent the development of metastases.”

Sure enough, when the researchers injected tumor cells into mice, they found that cancer progressed most rapidly among animals with depleted levels of cytotoxic T cells.

“It certainly confirms what this group and others have shown previously—that the adaptive immune response seems to be very important,” Engleman said. Appreciation for the immune system’s role in cancer progression grew thanks in large part to continued successes with immunotherapies, he said. The new study bolsters the emerging view that metastasis is tightly integrated with immune responses, “and takes away a fair amount of air over the importance of driver mutations.”