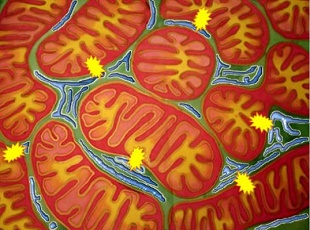 ODRA NOELMutations in one or more copies of mitochondrial DNA, known as heteroplasmies, are likely to be much more common in healthy people than previously anticipated. Approximately 90 percent of healthy participants in the 1,000 Genomes Project harbored at least one heteroplasmy, and 20 percent bore mitochondrial genome mutations implicated in diseases, according to the results of a study published today (July 7) in PNAS.

“It’s been known for a long time that lesions in mitochondrial DNA become more prevalent with age,” said metabolic disease specialist Neal Sondheimer of the Children’s Hospital of Philadelphia who was not involved with the work. This study “offers the intriguing possibility that maybe everybody has a little bit of something wrong with their mitochondrial DNA and that might play a role in aging.”

Because a single cell can contain hundreds to thousands of mitochondria, it also carries multiple copies—and, sometimes, variants—of these...

More than 500 point mutations in mtDNA have been implicated in various diseases so far. Previous studies, which had only examined a control region or subsets of mitochondrial DNA, suggested approximately 25 percent to 65 percent of people harbored heteroplasmy.

The new study, led by Zhenglong Gu of Cornell University, examined nearly 85 percent of the mitochondrial genome in 1,085 healthy participants, drawn from 14 different populations, and detected mutations at frequencies as low as 1 percent. The team identified a total of 4,342 heteroplasmies, 301 of which have been linked to disease. One in five participants carried at least one such pathogenic mutation, according to Gu.

This is the “first study to have used such deep sequencing on so many positions and in this many people, so it’s sort of hit a trifecta,” said Sondheimer.

Severe mtDNA mutations can cause certain myopathies, epilepsy, and other diseases, while less pathogenic variants have been implicated in complex conditions such as type 2 diabetes, aging, and cancer.

Although these results suggest pathogenic mtDNA mutations are more prevalent than previously thought, the low frequency at which they occur is unlikely to have a negative impact on health. However, if the mutations increase in frequency in some fraction of cells as they divide, they could provide a likely source of mitochondrial dysfunction, according to the authors.

“The problem is that mitochondrial DNA isn’t stable, so there’s nothing to say that a 1 percent load of mutation won’t blossom into a different level later,” Sondheimer told The Scientist. Even though a low-frequency mutation “isn’t pathogenic in and of itself, it’s harder to develop a mutation later if you don’t have one, compared to when you start with some level of mutation,” he said. This is especially important when considering the formation of oocytes, which creates a “bottleneck” in which only a few mitochondria from maternal cells are parsed into daughter cells. The process can change the disease-causing potential of a heteroplasmy from one generation to the next, according to Sondheimer.

This difference in mutation frequency between oocytes can mean patients with severe mitochondrial diseases have siblings who carry the disease-causing heteroplasmy, but remain healthy because of its lower frequency. “It is still unknown whether [these] low loads of pathogenic mutations, which are common in siblings, contribute to later-onset phenotypes like neurodegeneration, cancer or aging,” said Sondheimer.

In future studies, Gu and his colleagues plan to study heteroplasmy in single cells and in samples from various tissues, which might have different heteroplasmies than the samples in the 1,000 Genomes Project. “It’s possible that right now our estimates might not reflect the real situation in humans,” Gu told The Scientist.

The larger question, according to Gu, is to understand “whether these cells die or [proliferate and] cause degenerative diseases.” Understanding how the frequency of heteroplasmy changes over the course of a person’s life could help manage disease progression or aging, he said.

The mitochondrial genome could be “of ultimate important in aging-related disease,” said Gu. “Hopefully our research will generate more interest.”