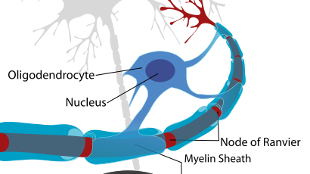 Oligodendrocytes extend thin processes of their cell membranes to form the myelin sheaths that wrap around neuronal axons.WIKIMEDIA, LADYOFHATSChanges in myelin, the fatty sheaths that insulate neuronal axons, may play a role in motor learning, according to a study published today (October 16) in Science. Genetically engineered mice that could not produce myelin were less skilled at learning a new motor task—running on a wheel with unevenly spaced rungs—than control mice.

“The paper shows very clearly that the ability to generate new myelin is necessary for adult mice to learn a complex motor task,” said the University of Michigan’s Gabriel Corfas, author of an accompanying commentary in Science and who was not involved in the research.

Moreover, because myelin is produced by non-neuronal glial cells called oligodendrocytes, which myelinate axons by extending thin processes of their cell membranes to wrap around them, the study challenges the long-standing...

“This is a very significant paradigm shift in the ways we think about how the brain changes in order to acquire information,” Corfas agreed.

Magnetic resonance imaging experiments in humans and rats have associated changes in the brain’s white matter, myelinated axons bundled together in large cables, with training in motor skills, but exactly how and why those changes were occurring was unclear. William Richardson, director of the Wolfson Institute for Biomedical Research at University College London, and his colleagues used a genetic system to selectively excise part of a gene called myelin regulatory factor (Myrf), inactivating it, in the oligodendrocyte precursor cells of laboratory mice. Myrf is not typically expressed in oligodendrocyte precursors but is necessary for the differentiation of new oligodendrocytes. “It’s not expressed until the precursors try and differentiate and express Myrf, and then if Myrf is missing, they just get stuck at that point,” said Richardson, “and we believe they die.” In other words, no Myrf means no new oligodendrocytes, and thus no new myelin. The system did not, however, affect preexisting oligodendrocytes.

Sure enough, mice lacking both copies of Myrf had fewer new oligodendrocytes and less myelin in the corpus callosum, a highly myelinated area that connects the two hemispheres of the brain and is involved in motor learning, compared with mice in which only one copy was deleted. Loss of Myrf also prevented mice from learning to run on a complex running wheel, with rungs unevenly spaced. Mice with both copies of Myrf quickly learned to use the new wheel and ran faster and farther per night than mice whose Myrf genes were inactivated.

To confirm that Myrf was impairing learning specifically, and not just motor skills in general, researchers tried introducing mice to the complex wheel before excising Myrf. In mice that had already learned to use the complex wheel, loss of Myrf had no effect on running speed, suggesting that myelin is important for learning but not recall or motor coordination.

“It’s known that the synapses between neurons strengthen when the circuits those neurons are a part of fire, and that has always been believed to be what underpins learning—this synaptic strengthening, so-called long-term potentiation,” said Richardson. “What our study shows is that although that undoubtedly does occur, there’s an additional refinement . . . which is that the active circuits presumably must get myelinated.”

Richardson added that he and his colleagues next plan to explore the roles of oligodendrocytes in other kinds of learning as well. “By finding a new mechanism involved in learning, it gives us a whole new target that in future we might be able to manipulate in order to, say, improve or accelerate learning,” said Richardson. Such information about the roles of myelination in learning could also be relevant to demyelinating diseases, such as multiple sclerosis, he added.

“I think this is an outstanding piece of work,” Franklin said. “It’s a landmark study in myelin biology and in neuroscience.”