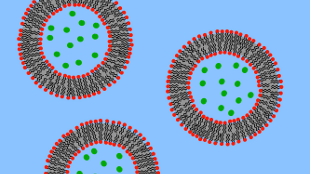 WIKIMEDIA, MDOUGMGreat things sometimes come in small packages. Indeed, in recent years, the smallest packages of all—nanoparticles—have proven their worth in delivering potent cancer drugs directly to the site of the tumor, allowing doctors to minimize the often dangerous side effects of chemotherapy. According to the National Cancer Institute, the field of nanomedicine grew exponentially from 2000 to 2010, and the agency predicts that the United States workforce in nanomedicine will reach 2 million by 2015.

“Many in the field see that now is a tipping point for nanomedicines,” Greg Berk, chief medical officer of the Cambridge, Massachusetts-based nanomedicines company BIND Therapeutics, wrote in an email to The Scientist. “[N]next generation nanomedicine technologies have emerged recently with abilities to be highly selective and targeted to deliver high drug concentration to disease sites, a major advance in cancer drug development.”

Nanomedicine started creating its own footprint in...

Around the same time, Massachusetts Institute of Technology research engineer Robert Langer also developed nanoparticles as chains of hydrocarbons known as polymers. Decades later, researchers have shown that such targeted nanoparticle therapies can effectively deliver drug cargo to tumors, while sparing the rest of the body’s cells from the drug’s toxic effects. Indeed, both types of nanoparticles are in clinical development as cancer-drug delivery vehicles, and some liposome-based have even made it to the market.  MyoCet, for example, a liposome containing chemotherapeutic agent doxorubicin, was approved in 2004 in Canada and Europe for treatment of metastatic breast cancer, when used in combination with cyclophosphamide, a commonly used anticancer drug. And DOXIL, another lipid-enclosed doxorubicin formulation, is approved to treat AIDS-related Kaposi sarcoma; ovarian cancer (if first line treatment fails); and also multiple myeloma, in combination with another drug known as Velcade.

“There are now nanoparticulate formulations containing single therapeutic agents that are approved for use in patients with cancer, whereas 20 years ago, many suggested that this would not be possible,” Marcel Bally, head of experimental therapeutics at the British Columbia Cancer Agency in Vancouver, Canada, told The Scientist in an email.

There are now a total of three nanoparticles on the market as cancer therapies, and at least a dozen more are currently making their way through clinical trials. Virtually any cancer drug can be enclosed within a nanoparticle, and they range in size from small chemotherapy drugs to larger macromolecules, such as nucleic acids. Alnylam Pharmaceuticals is currently investigating a drug candidate composed of a lipid-shell containing a small interfering RNA (siRNA) that can destroy tumors by decreasing the expression of two gene products that are involved in tumor growth: kinesin spindle protein (KSP), involved in cancer proliferation, and vascular endothelial growth factor (VEGF), involved in the growth of new blood vessels that feed tumors. Known as ALN-VSP, the drug passed through Phase 1 trials earlier this year, demonstrating anti-tumor activity in patients with liver cancer and other solid tumors that have spread to the liver. One endometrial cancer patient even experienced a complete resolution of the disease in her liver.

“Nanodelivery has received considerable attention in the last few years and will continue to have a significant impact on medicine,” Jared Gollob, vice president of clinical research at Alnylam, said in an email. “Patients with primary liver cancer and metastatic disease of the liver (also known as secondary liver cancer) have poor prognoses under current treatments. There is a severe unmet medical need here.”

The liposome platform is limited, however, in that it cannot release the drug into the tumor in a regulated way. The mechanism of drug release from liposomes is not well-understood, and may involve complex processes such as disruption of the liposome membrane or fusion with cellular membranes. In fact, the actual rate of drug release from liposomes in tumors even for a marketed product like DOXIL is not completely known. As a result, there are examples where liposomal drugs have failed in clinical trials because they released the drug too slowly or too quickly. In contrast, the polymer-based nanoparticles originally developed by Langer allow researchers to design treatments that release the chosen drug at a predictable rate controlled by diffusion.

“While the first generation of drugs using [lipid] nanotechnology were considered pioneering at the time and became successful blockbuster cancer drugs, they were essentially reformulations of older drugs,” said Berk. “Now, the next generation [using polymers] is taking nanotechnology to a whole new level with the ability to fundamentally change the efficacy and safety of drugs. The properties of these advanced compounds are well suited to target rapidly proliferating cells such as cancer cells, and several are already in the clinic.”

Researchers at BIND Therapeutics created one of the first polymer-based nanoparticles for cancer treatment by mixing poly-lactide (PLA), a biodegradable polyester that has been used in US Food and Drug Administration-approved medical devices and pharmaceutical products for several decades, and polyethylene glycol (PEG), a biocompatible polymer commonly used in pharmaceuticals. PEG absorbs water, forming a hydration layer that encloses FDA-approved cancer drugs and prevents the binding of blood proteins such as antibodies that might trigger the removal of the nanoparticles by the immune system. The PLA component, on the other hand, serves to control the release of the drug. At the same time PLA and PEG are being layered, the nanoparticle’s surface is decorated with small peptides that help the nanoparticle specifically locate and bind to the tumor’s surface. As a result, tumor cells are exposed to a higher drug concentration over a prolonged period of time then they are when treated with a conventional docetaxel regimen.

Using this PLA-PEG strategy, BIND is developing several such nanoparticles for a variety of cancers, including prostate and lung cancer. BIND-014, for example, which contains the FDA-approved cancer drug docetaxel and is covered in ligands that interact with a common tumor antigen known as prostate-specific membrane antigen (PSMA), recently completed a Phase 1 clinical trial involving 28 patients with advanced or metastatic solid tumors. The results, presented last month at the annual meeting of the American Association for Cancer Research (AACR), showed that BIND-014 inhibited tumor growth, and in one patient, completely resolved the disease. The data also showed that the tumors were exposed to BIND014 for a longer period of time thanks to a longer half-life than conventional docetaxel, and that a lower dose was needed to achieve a comparable level of anti-tumor activity as treatment with unpackaged docetaxel, which translated into fewer side effects for patients.

“This targeted docetaxel allows us to change the pharmacology and improve local exposure of the tumor to the drug,” said Berk, who noted that BIND-014 will commence Phase 2 trials this month.

And researchers have just uncovered the tip of the iceberg, Bally noted. “To date, nanotechnology has been addressing simple problems (e.g. changing the distribution of drugs to reduce toxicity or increase efficacy) but the future for this technology is limitless,” he wrote to The Scientist. “Nanoformulations of the future will be complex and multifunctional, designed to deal with complex disease indications.”

Correction (May 20): The PLA component of BIND Therapeutics' platform does not dissolve, allowing for slow diffusion release of the drug, but PLA is engineered to control the slow diffusion of drug from the particle. The Scientist regrets the error.