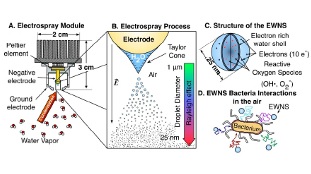 “Using nanoscale water droplets to inactivate pathogenic bacteria is an innovative approach, and these early results show its effectiveness and great potential for improving the microbial safety of food supply as well as the sanitation of food processing surfaces,” Hongda Chen, acting deputy director at the US Department of Agriculture’s National Institute of Food and Agriculture, wrote in an e-mail.

Following a harvest, farmers have a handful of options to sterilize produce. The popular choices are chemical spritzes laced with chlorine- or quaternary ammonium compounds, which can eliminate bacteria in seconds....

So nanoengineer Philip Demokritou of the Harvard School of Public Health and his colleagues devised a device for turning water vapor into nanoparticles that tear bacteria apart. The gadget sports a gold-plated electrode, which is cooled to condense water on its microsized tip. A second concentric electrode hovers 5 millimeters below. When activated, electric charges build in the water, drawing liquid toward the circular electrode. Surface tension, however, grips the droplets to the gold tip, until the strain becomes too much, and an aerosolized mist of water nanoparticles spews forth. During the process, some water reacts with air molecules to produce reactive oxygen species (ROS).

“We take the water and restructure it,” Demokritou told The Scientist. “And [the resulting] ions are then encapsulated by the water nanostructures.” The team previously found that the charged coatings of water nanoparticles adhere to bacteria, and that subsequent exposure to ROS shatters the microbes’ membranes.

For this latest study, the team placed cherry tomatoes and stainless steel cutting boards inside a chamber, exposing both to three typical foodborne bacteria—Escherichia coli, Salmonella enterica, and Listeria innocua­. The team then filled the boxes with their nanobombs, and in each scenario, disinfected the fruits and steel surfaces.

The disinfection results, noted Chen, are comparable to those achieved using existing technologies. “This is exciting and promising,” he said.

“Consumers want more chemical-free, biofriendly approaches for their food. With this method, there are no residues to worry about, and in three to four hours, everything becomes water vapor again,” said Demokritou. Two years ago, a preliminary investigation showed that mice could inhale much higher doses of these water nanobombs without adverse health effects.

While promising, the approach does have its limitations, explained food scientist Donald Schaffner of Rutgers University in New Jersey, who was not involved in the study.

“The food industry does not have the money to spend on interventions that take significant time, and the amount needed for [bacterial] reduction here is quite significant—on the order of one hour or more,” Schaffner said.

To boost disinfection rates, Demokritou and his colleagues will continue to tweak how they apply the nanoparticles. In this study, for instance, the team tried two types of dispersal: one passive approach—filling the chamber with nanobombs—and a more targeted method—using a charged metal plate underneath tomatoes to attract the nanoparticles. The latter resulted in a higher rate of disinfection.

Because the setup simply uses water vapor, Demokritou explained it could be applied at several places along the food production chain—at the farm, on a transport truck, or even as an invisible mist in the grocery aisle.