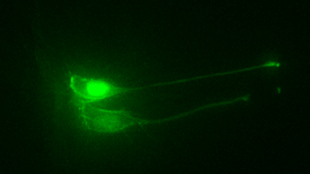 Differentiating neurons in the embryonic spinal cord abscise their apical tips to detach from the ventricular surface.COURTESY OF RAMAN DASIn the early stages of vertebrate development, the precursors to neurons must leave their nursery at the apical surface of the neural tube and navigate to their new home in the growing nervous system where they will become differentiated neurons. Researchers report today (January 9) in Science on a newly identified means of accomplishing this detachment, one that involves cells lopping off a portion of themselves and leaving it behind—a procedure the group dubbed “apical abscission.”

“Certainly no one had seen this apical abscission before to my knowledge, and it’s a new kind of abscission process,” said William Harris, a neuroscientist at the University of Cambridge who did not participate in the study.

Kate Storey of the University of Dundee in the U.K. and her colleague used time-lapse microscopy to observe neurogenesis in slices of embryonic chicken spinal cords. The researchers had labeled the membranes of neuronal precursors—which are connected to the apical surface by long tentacles—with a green fluorescent protein. Their microscopic movies captured a constriction of the tentacle before the tie was ultimately severed. The entire process was complete in about an hour. The primary cilium remained with the portion of the cell that was chopped off.

“I think previously it was thought that [the neuronal precurors] just withdrew, taking the whole cell with it. And what we observed was actually there was an abscission event and the apical compartment of the cell was left behind,” Storey said.

Although the exact role of the abscission has not yet been worked out, it’s likely to have some biological significance. “There’s a lot of interesting cell signaling proteins that accumulate at that apical tip,” said Ben Novitch, a neural stem cell researcher at the University of California, Los Angeles. These include factors involved in regulating cell polarity and the Sonic hedgehog signaling associated with the primary cilium that helps to maintain young cells in a proliferative state.

It’s known that as cells transition from a stem-cell state to a differentiated state they become less responsive to certain signals. “And this may explain in some way why this is, because if they’re clipping off a signaling hub from the cell it may allow the cell to ignore the environment and go on and differentiate into a neuron,” Novitch told The Scientist. “I think it’s a story that makes sense,” agreed Harris.

Storey’s discovery of apical abscission might also shed light on a disorder in humans called periventricular heterotopia, in which neurons don’t migrate appropriately during development. “I can imagine potentially that some of the same genes involved in [apical abscission] are going to be causal in this disease,” said Volney Sheen, a neurologist at Beth Israel Deaconess Medical Center in Boston, Massachusetts, who studies periventricular heterotopia. He added that Storey’s system offers a model for dissecting the process of detachment and potentially, the factors that contribute to its malfunctioning.

Although Storey and her colleague also observed apical abscission occurring in cells of embryonic mouse spinal cords, it’s not clear yet whether the process is universal—both across cell types and taxa. “We’ve seen it using our system probably because we use a wide-field imaging system that allows you to detect very low-level fluorescence and we use very short exposure times. It allows you to see thin, wispy things a confocal might blow away,” Storey said. She added that while it is possible that apical abscission occurs more broadly, “we don’t know yet.”