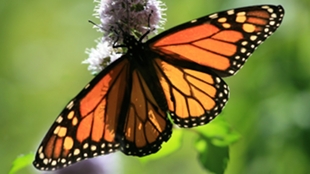 Wikimedia, RandyNature can sometimes be brutal, but all animals have evolved strategies to cope. Some of these strategies go well beyond building shelter to weather the storm or forming alliances to provide safety in numbers. Many animals have gone so far as to alter their diets and behavior in ways that protect them from nature’s microscopic threats—parasites.

Chimpanzees held captive often succumb to infection by a parasitic worm, which can lead to lethal intestinal blockages or secondary bacterial infections. But chimps in the wild rarely succumb to such infections. More than 30 years ago, Michael Huffman, who studies evolution of social systems at the University of Kyoto, noticed that wild chimps were treating themselves by ingesting foods with special properties that fight intestinal worm infections. Since that time, scientists have identified numerous other species that partake in similar practices, including macaques and sheep. Now, recognition that various insects...

Huffman first encountered self-medicating chimps in Africa in the 1980s. He recalls watching a sick chimpanzee suck juice from the bitter leaf plant. A traditional healer, Mohamedi Seifu Kalunde, told Huffman that bitter leaf was used medicinally by the local people, the WaTongwe. The plant didn’t provide nutrients to the chimpanzee, and is rarely used by healthy chimps, but sick animals are commonly observed ingesting the plant, and their symptoms usually resolve soon after. Huffman’s later work identified several compounds in bitter leaf and other medicinal plants used by the chimps with activity against parasitic nematode infections.

Around the same time, researchers also noticed that many chimps perform a behavior dubbed “leaf swallowing”—the deliberate folding and swallowing of leaves, without chewing, usually before nutrient-rich food is consumed. But this behavior didn’t have to do with the plants’ pharmacological activity, Huffman learned. Instead, swallowing the leaves, which were covered in rough hairs, hastened the time it took food to traverse a chimpanzee’s gastrointestinal tract, from 35 hours to just 6. And when Huffman and his colleagues examined samples of chimp poop, they found tiny parasites caught in the leaves’ silica hairs. It appeared that sick chimps were eating the leaves to sweep parasites—including the same nematode targeted by bitter leaf—from their intestines. 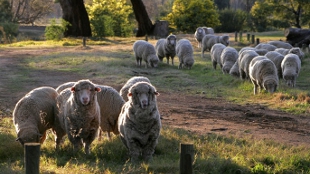 Sheep choose tannin-rich food to reduce gut nematode infections. Image credit: Wikimedia, Fir0002Over the past 30 years, scientists have come to realize that chimps are by no means the only animals that alter their diet and behavior to treat their own maladies. Huffman later documented Japanese macaques participating in similar practices, and other scientists watched capuchin monkeys rub themselves with millipedes, which secrete benzoquinones that may help repel mosquitoes. Even some domestic animals are taking their health into their own hands.

Sheep, for example, are known to regulate their energy and nutritional balances by modifying their food choices. Additionally, they learn to choose food rich in tannins—astringent plant compounds that can kill parasites and relieve infections—when suffering from gut nematode infections.

Researchers investigating the phenomenon of self-medicating animals hope their work can augment animal husbandry practices. “The idea is to provide plants and supplements with natural products like tannins and the opportunity for animals to select [these products] themselves, and reduce their parasitic burden as needed,” Juan Villalba at Utah State University explained. This could help alleviate the specter of drug-resistant pathogens, which often arise as animal managers preemptively dose all animals in their charge.

Zoo animals may also benefit from such self-medicating strategies, Villalba added. When animals eat the typical restricted diets served in most zoo facilities, “one of the problems we start finding is that animals become sick and have a lot of digestive problems,” he noted. “This can be solved when the diet and food alternatives mimic what is going on in natural conditions.”

Self-medication in primates and other mammals is most likely a learned behavior, initially picked up as the animals watch their mothers, then reinforced as they notice the beneficial effects of the various medicinal plants. But self-medication has also been identified in animals with no capability for abstract reasoning and no opportunity to learn from their elders. 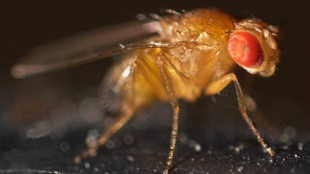 Drosophila melanogaster larvae increase their intake of parasite-killing alcohol when infected by a parasitic wasp. Image credit: Wikimedia, Mr.checkerScientists recently discovered, for example, why monarch butterflies are so picky when it comes to choosing the milkweed plants on which to lay their eggs. “The females often taste a plant, reject it, and fly away,” explained Jacobus de Roode of Emory University. It turns out that this choosiness is regulated by the monarch’s health. De Roode found that butterflies infected with the protozoan parasite Ophryocystis elektroscirrha seek out milkweeds containing high levels of cardenolide, a plant steroid that interferes with parasite growth in monarch caterpillars.

Fruit flies also self-medicate, but instead of consuming plants, they turn to alcohol. “It’s one of the really strange things about Drosophila melanogaster—how resistant they are to alcohol,” said Todd Schlenke of Emory University. Parasitic wasps, however, are not: alcohol interferes with their development. Schlenke discovered that parasitic wasps prefer to lay their eggs in larvae fed lower levels of alcohol, and when given a choice between food rich or devoid of alcohol, infected Drosophila larvae ate more alcohol-rich food than uninfected larvae.

Because flies don’t learn from their mothers, the behavior must be innate, said Schlenke, who is currently testing the hypothesis that parasitic infection changes fly brain chemistry, prompting alcohol-seeking behaviors.

In addition to being a fascinating study of animal behavior, identifying what choices animals make to self-medicate may help people as well, argued de Roode. Protozoan parasites, like malaria and toxoplasmosis, are human health concerns, and these may be susceptible to the same compounds monarchs use to target O. elektroscirrha. “There may be some applications down the line,” said de Roode.

Check out images of these and other self-medicating animals in this slide show.