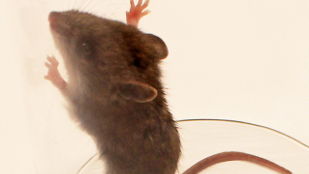 FLICKR, WOODLEYWONDERWORKSWhen the body suffers an acute injury, it releases natural opioid compounds that have an immediate analgesic effect, making painful accidents much more tolerable. But that pain-reducing system may be a double-edged sword, according to a mouse study published today (September 19) in Science: the process appears to switch a natural opioid receptor into a chronically “on” position; flipping it back “off” leads to a resurgence of pain in the animals, even months after the initial injury. Moreover, the pain behaviors that resurfaced when the receptor was turned off looked strikingly like those associated with opioid withdrawal.

“You have the same system, the same structure, involved in both the effect of analgesia—in reducing pain sensation—and in opioid dependence and chronic pain,” said neurobiologist Flaminia Pavone of the Cell Biology and Neurobiology Institute in Italy, who was not involved in the work. “[It’s] a paradoxical effect that can...

Chronic pain can arise following acute injuries. Chronic back pain, for example, is often preceded by lower back injuries. When and why acute pain is translated into chronic pain, however, is largely unknown. Sensory neurobiologist Bradley Taylor from the University of Kentucky Medical Center and his colleagues wondered whether the answer might lie in the body’s mechanisms for controlling pain in the first place. “We know that the body can control acute pain,” Taylor said, “but we asked whether the body could control chronic pain.”

The body’s system of pain control for acute injuries involves the release of natural opioid compounds, such as enkephalins and endorphins, that bind receptors in the spinal cord to suppress the transmission of pain signals to the brain. Blocking this system following surgery, for example, can lead to increased postoperative pain.

To investigate this system’s potential role in chronic pain, Taylor and his colleagues first induced injury in the paws of mice via an injection of complete Freund’s adjuvant (CFA), which is  commonly used to model inflammatory pain. They then waited for the initial pain symptoms to subside and began interfering with the opioid pathway. For up to six and a half months following the event, such interference resulted in a resurgence in pain behaviors in the mice that had been injured, but not the healthy controls.

“We were amazed at how robust the response was,” Taylor said. “The sensitivity was just as great as when the initial pain behavior had peaked.”

“The most intriguing thing to me is that how the thing can go all the way out so far” past the initial injury, said molecular pharmacologist Ping-Yee Law of the University of Minnesota, who was not involved in the work. “That is really amazing.”

By treating the mice with various interfering compounds, the researchers determined that the root of the pain resurgence was the inhibition of the constitutive activity of the mu opioid receptor (MOR). In other words, even in the absence of the natural opioid compounds that initially bound and activated MOR, the receptor was continuing to send pain-inhibition signals to the brain. Blocking that constant activity caused the previously injured mice to feel pain once again.

Then, Taylor’s student Greg Corder, lead author on the paper, alerted his PI to the fact that the mice weren’t just showing increased sensitivity in their once-injured paw, but also in a paw on the opposite side of the body. He also noted that some of the mice were jumping. That struck Taylor as odd. “Mice don’t normally jump much,” he said, thinking it was probably an outlier. But it wasn’t just one animal; many of the mice were jumping, and Taylor began to suspect that the mice were showing signs of opioid withdrawal. Sure enough, upon closer examination, Corder also noticed paw tremors, shaking behavior, and increased locomotion—all signs of drug withdrawal. “That was the result that totally blew us away,” Taylor said.

In essence, Taylor and his colleagues surmised, blocking the constitutive activity of MOR wasn’t reviving pain from an old injury, but was actually inducing pain as a symptom of opioid withdrawal. “The good news is that the endogenous opioids can block that pathway,” Taylor said. “The bad news is, when opioids are removed, not only are we unmasking that pathway, but we’re putting the animals into a state of withdrawal hyperalgesia, the pain that’s experienced during opioid withdrawal.” Further support for this theory surfaced when the researchers found evidence of the involvement of adenylyl cyclase type 1, an enzyme known to be important in drug dependence and addiction.

Pharmacologist Mei-Chuan “Holden” Ko of Wake Forest University School of Medicine noted that while the constitutive activity of MOR had previously been linked to hyperalgesia and dependence, the fact that this process can be set off by an acute injury such as CFA injection is “new and exciting.”

“Tissue injury produces MORCA [constitutive activity] which last for months, . . . and this injury-induced MORCA regulates the transition from acute to chronic pain in rodents,” he told The Scientist in an e-mail.

Inna Belfer of the University of Pittsburgh’s Center for Pain Research and her colleagues had previously discovered natural variation in the MOR gene in mice and in humans, which can affect the binding of both endogenous and exogenous opioids, and potentially, the receptor’s propensity for becoming constitutively active. “What happens is, you get the receptor in some people that is predisposed to these different capabilities,” she said. “And instead of analgesia, you get chronic pain or hyperalgesia, depending on the isoform of the receptor.”

Among the various questions the work of Taylor’s team has opened up, both Ko and Pavone expressed an interest in knowing whether the natural opioid system might play a similar role in response to other types of pain. “What could be interesting in the future is [to see if] similar mechanisms are also involved for neuropathic pain, the time course for [which] is long-lasting,” Pavone said.

Taylor and his colleagues are also interested to learn what might make the opioid system fail on its own—without experimental intervention. One possibility is stress, a known factor in causing opioid addicts to relapse. “We speculate that stress is also a key factor in ‘relapse’ in the chronic pain patient,” Taylor wrote in a summary of his team’s work. “Loss of MORCA analgesia, during stress for example, could lead to the emergence of widespread, rampant chronic pain such as is observed in conditions such as fibromyalgia.”