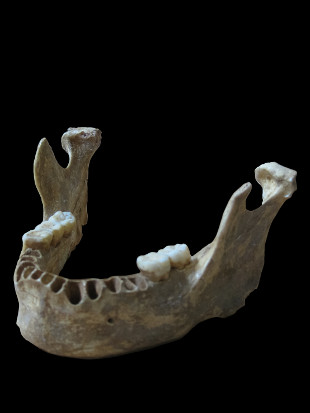 DNA taken from a 40,000-year-old modern human jawbone from the cave Pestera cu Oase in Romania reveals that this man had a Neandertal ancestor as recently as four to six generations back.IMAGE, SVANTE PAABO, MAX PLANCK INSTITUTE FOR EVOLUTIONARY ANTHROPOLOGYBetween 35,000 and 45,000 years ago, modern humans spread throughout Europe. Around the same time, Neanderthals disappeared from the landscape—but not before interbreeding with Homo sapiens. Recent research has revealed that all non-Africans living today retain a genetic trace—1-3 percent of the genome—of Neanderthal ancestry. And 40,000 years ago, human genomes may have contained twice as much Neanderthal DNA, according to a study published today (June 22) in Nature.

Genetic material recovered from 40,000-year-old human bones unearthed in Romania harbors about 6-9 percent Neanderthal DNA, the study reports. Some of this DNA was contained in three relatively large chromosome segments, suggesting the individual had a Neanderthal ancestor...

“What’s amazing about this sample is that we were so lucky to find it,” agreed Harvard Medical School population geneticist David Reich, a senior author on the paper.

Reich and his colleagues sequenced DNA from the jawbone of a so-called Oase individual, named for the region of Romania in which the modern human skeletal remains were found in 2002. The skeletal remains retained gross morphological features that suggested it was a human-Neanderthal admixture, so Reich decided to plumb the genome for such a relationship. Although contaminated with exogenous DNA, the jawbone yielded sequencable DNA that the researchers processed in order to isolate and analyze endogenous genetic material. “There are only minute amounts of humanlike DNA material in there,” Ludovic Orlando, an ancient-DNA researcher at the University of Copenhagen who was not involved with the study, wrote in an email to The Scientist. “That in itself is quite a challenge, but on top of that you have huge contamination levels from a mostly European background, meaning that you are really after a needle in a haystack here.”

The key to sussing out the individual’s own genetic material involved bioinformatic techniques that separated out contaminating DNA. “They were able to use recent approaches to identify endogenous parts of the genome,” said Ripan Malhi, a University of Illinois molecular anthropologist who was not involved with the study.

In addition to finding the chromosomal segments that suggested a recent mating event between modern humans and Neanderthals, Reich and his colleagues found genomic evidence of an earlier hybridization that likely occurred between the two hominin species.

This isn’t the first time researchers have identified a human-Neanderthal hybrid. Previously, researchers had found evidence of an older admixture event that occurred in the Near East in what is modern-day Israel. The new results suggest that Neanderthals and modern humans mixed in modern-day Europe. “What’s exciting about this is that it is evidence that Neanderthal mixture occurred in Europe as well,” said Reich. “What seems to have happened is that modern humans moved through Neanderthal territory and mixed with them multiple times through that span.”

As ancient-DNA technologies and methodologies continue to improve, scientists are likely to uncover more information that will further resolve the evolutionary history of modern humans. Paleontologists have a number of skeletal remains that bear morphological traces of shared ancestry with Neanderthals, and DNA-based techniques can validate and quantify more traces of human-Neanderthal admixture. “It wouldn’t surprise me if we found another individual like this in eastern Eurasia,” said Malhi.

And looking even further into the future, ancient-DNA researchers will be able to elucidate even more about early human evolution. “I’m really looking forward to the day when we can get DNA out of Homo erectus,” said Nielsen. “That might really change our view of human evolution. I think that will come, and I think that’s really exciting.”

(To read more about how ancient-DNA work is informing the study of human evolution, see this month’s feature story “What’s Old Is New Again” and the accompanying TS Live video, “Genetic Time Machine.”)