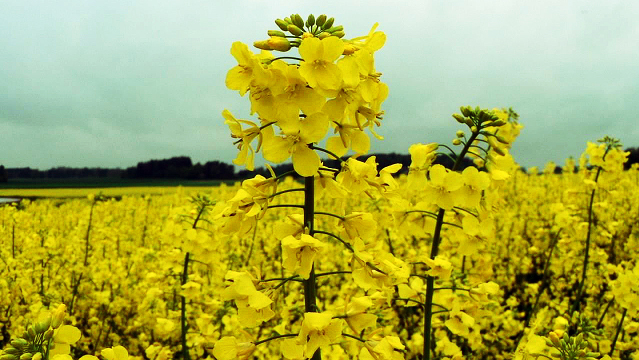 WIKIMEDIA, ROSENDAHLTreatment of oilseed rape, a major flowering crop grown in England, with neonicotinoid pesticides is correlated with population declines of wild bees, according to a study published today (August 16) in Nature Communications, in which researchers examined links between the area of chemical-treated crops and populations of 62 wild bee species across parts of the U.K. for 18 years.

In analyzing their data, researchers from the NERC Centre for Ecology and Hydrology and Fera Science Limited, separated the bee species into those that forage on oilseed rape and those that do not, finding that the oilseed-rape foragers were three times as negatively affected by agricultural neonicotinoid use as those that foraged on other plants. “From a correlative perspective, there’s an underlying mechanism that’s driving [the decline] and . . . it’s likely to be exposure to neonicotinoids applied to the oilseed rape crop,” said study coauthor Ben...

“Taken as a whole, the paper provides the best evidence I’ve seen to indicate that neonicotinoids applied to oilseed rape have had a measurable impact on the distributions of wild bee species that feed on the crop,” Bill Kunin, an ecologist at the University of Leeds who was not involved in the work, told The Scientist in an email. “As such they provide support for the current European ban on using neonics on oilseed rape and other animal-pollinated crops.”

In 2013, the European Commission issued a moratorium on the use of neonicotinoids on mass-flowering crops, of which oilseed rape, grown primarily for oil production, is the most significant in the U.K., Woodcock explained. Policymakers are now considering whether to extend the ban. Evidence that neonicotinoid pesticides negatively affect bee health has been mounting for some time. Previous research in honeybees and bumblebees, for example, has found that neonicotinoids impair navigation, cause problems for queens, and reduce male fertility. But studies on wild bees have been few, Woodcock said.

“What we’ve been able to do here is look over a much longer time period and look at over 60 species in the U.K., so it’s giving a much more comprehensive idea of the longer term potential negative impacts of this pesticide,” he told The Scientist.

The researchers’ analysis covered 1994 to 2011, a period intended to center on the year 2002, when neonicotinoids were first used on commercial oilseed rape in England. The researchers gathered long-term data from various sources. Bee population data came from the Bees, Wasps and Ants Recording Society, a distributed group of amateur naturalists dedicated to the surveying of these insects in Great Britain and Ireland. “It’s data that’s collected by thousands and thousands of different people; I mean, the records go back decades and decades,” Woodcock said.

From government records, the researchers determined the cover of oilseed rape grown in a given area and the proportion of that oilseed rape that was treated with neonicotinoids. From those data, they tested for correlations between oilseed rape cover, pesticide use, and bee populations.

Overall, the authors did not find evidence that any of the wild bee species under study had undergone population extinctions. Kunin noted, however, that the team did not have enough data to include rare bee species—“the ones most at risk of extinction”—in its analysis.

“The paper uses complex statistical models to draw out the conclusion that neonicotinoids are affecting bees,” Peter Dearden, a geneticist and bee researcher at New Zealand’s University of Otago, who was not involved in the work, wrote in an email to The Scientist. “This is excellent work, but is still a correlation. We cannot yet say that the declines are primarily due to the insecticides, though the data is strong, robust and clearly points that way.”

Based on data from this and other studies, “the preventive large-scale use of neonicotinoid pesticides or insecticides should be really carefully reconsidered, basically the benefit-cost ratio should be really evaluated,” Peter Neumann of the University of Bern’s Institute of Bee Health told The Scientist.

That doesn’t necessarily mean banning neonicotinoids, noted Neumann, who was not involved in the present study. “Banning pesticides altogether is probably difficult, I’m afraid,” and restricting use of one pesticide could potentially lead to the introduction of a replacement pesticide with its own set of potential problems, he said. “So I think, for a sustainable future of pollination, we need to have a sustainable solution, and that is a more pragmatic approach to pesticides.”

B. Woodcock et al., “Impacts of neonicotinoid use on long-term population changes in wild bees in England,” Nature Communications, doi:10.1038/ncomms12459, 2016.