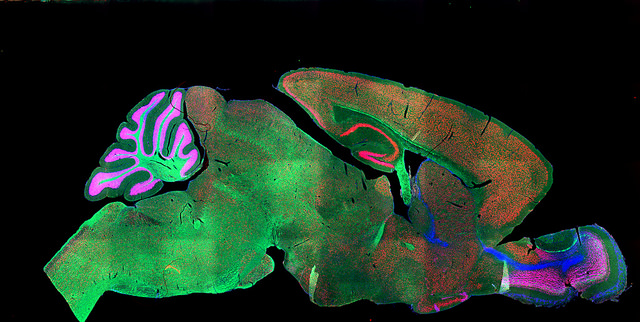 FLICKR, NICHDConsuming calorie-dense foods usually induces a feeling of satiety in animals. But in humans, large amounts of alcohol—the second most calorie-dense nutrient after fat—can trigger overeating. Now, researchers have found that, in mice, this effect is induced because alcohol activates a specific set of hypothalamic neurons associated with feeding behavior. The results, published today (January 10) in Nature Communications, reveal a previously unrecognized link between binge drinking and binge eating.

Earlier studies have established that stimulating agouti-related protein (AgRP) neurons, found in the hypothalamuses of mice and humans, is sufficient to cause overeating even when the animal does not need additional energy. Sarah Cains of University College London and colleagues set out to test whether alcohol-induced overeating was mediated by AgRP neurons in mice.

“We were thinking about how alcohol is associated with eating in cultural situations in humans, and wanted to see if there’s something neurological...

To begin, the team tested whether alcohol drove mice to binge eat. In an “alcoholic weekend” experiment, the researchers injected male and female mice with a single dose of alcohol (roughly equivalent to an approximately 150-pound adult drinking one-and-a-half bottles of wine) every day over a three-day-period; control animals received a saline solution. Three days before and after the experimental period, all mice received the saline solution. The animals were housed individually to avoid group behaviors. On days they were given alcohol, both male and female mice consumed larger amounts of food within one to four hours after being dosed, suggesting alcohol-induced overeating occurred independent of social situations.

Brain slices taken from deceased, alcohol-treated mice showed that deep-brain ethanol levels increased and activated AgRP cells, mimicking how fasting or hunger hormones are known to affect these neurons. When mice were treated with an inhibitor that blocked AgRP cells from being activated, the animals scaled back on their food intake, and alcohol did not induce overeating.

The study “has done a pretty nice job nailing down that this is at least one of the brain regions involved in alcohol induced overeating,” said pharmacology researcher Bryan Roth of the University of North Carolina, Chapel Hill, who was not involved with the work.

The results reveal “a new mechanism for how alcohol might interact with these neurons that’s surprising,” said Scott Sternson, a neuroscientist at the Howard Hughes Medical Institute’s Janelia Research Campus who also was not involved with the study. “But we need to consider alternative ways in which alcohol in vivo might lead to participation of AgRP neurons in increased eating,” he added.

Zachary Knight at the University of California, San Francisco, pointed out that while silencing AgRP cells suppressed overall food intake in the study, alcohol-related eating was also reduced when animals with silenced AgRP neurons were exposed to ethanol. “This doesn’t necessarily mean that, in normal animals, when an animal consumes ethanol these neurons are naturally activated,” said Knight, who was not involved with the work. “That’s an essential piece of information that will be necessary to show that these neurons are really part of the physiologic pathway” linking excessive alcohol consumption to overeating, he said.

In future work, Cains and colleagues aim to evaluate other neural mechanisms involved in energy balance and nutrition that could be affected by alcohol. “We do expect that alcohol will affect other neurons in the feeding circuit,” she said.