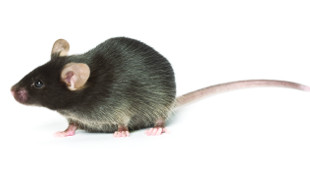 LABORATORY MOUSE OF STRAIN C57BL/6JJACKSON LABORATORIESSearching for new mutations associated with neurodegenerative and cognitive defects, researchers have uncovered two mouse genes that function in the same critical pathway such that, when both are lost, neurodegeneration results. The genes are both involved in protein translation and, surprisingly, one encodes a transfer RNA (tRNA) gene uniquely expressed in the brain—a first example of such differential expression in vertebrates.

While, in theory, eukaryotes need to encode approximately 42 different tRNA genes—to decode the 61 messenger RNA (mRNA) triplet codons that specify an amino acid—the genomes of vertebrates contain hundreds of tRNA genes. So far, researchers have presumed that the redundancy exists because a large amount of these tRNAs are needed to meet the demands of constant translation of mRNAs to proteins. Also surprising was the pre-existence of this tRNA mutation only in a specific, widely studied strain of laboratory mice. The...

“It has been assumed that more tRNA genes just make more tRNAs, but this study very strongly suggests that specific tRNA genes have specific functions in animals—that they are not all the same,” said Ambro van Hoof, a molecular biologist who studies mRNA degradation at the University of Texas in Houston but was not involved in the work.

“We think about tRNA biology as so well-studied, but there is still so much left to understand” said Susan Ackerman, an author on the study who investigates the molecular mechanisms of neurodegeneration at the Jackson Laboratory in Bar Harbor, Maine. “The central nervous system specificity of this tRNA was a complete surprise to us. I think this work says ‘Don’t ignore these genes, they are really important.’”

In a genetic screen, Ackerman and her colleagues identified a mouse that had ataxia, neuronal death in the cerebellum, neurodegeneration in the retina, and died by nine weeks of age. But when they crossed these mice to another strain in order to map the causal mutation, the frequency of the phenotype was much lower than expected. Further genetic work and cross breeding experiments led the team to identify a modifier point mutation, in an arginine tRNA  gene, but only in one type of mouse—the C57BL/6J (B6J) strain. In other mouse strains, neither mutation alone lead to neurodegeneration, suggesting that the two mutations work in concert.

“It’s exciting to see that two specific defects in the general protein translation pathway can cause a specific disease in these mice,” said van Hoof.

The researchers first identified a mutation in the GTPBP2 gene, which encodes a little-studied protein that is part of a family of ribosome release factors, which work to help relieve ribosome stalling during translation. This protein is normally widely expressed, but not made in the mutant mice. Later, the researchers found that only in combination with the tRNA mutation does the GTPBP2 mutation lead to the neurodegenerative phenotype.

Using a ribosome profiling technique, the researchers found that ribosomes were preferentially stalled at one of the arginine codons throughout the genome in the brain tissue of mutant mice. “We previously had no idea what ribosomal stalling really meant,” said Ackerman. The researchers knew that “yeast that lack [one of the ribosome release factors] grow more slowly, but there was no clue about the phenotype in higher organisms,” she added.

“This study is rich with new and surprising findings,” said Jennifer Darnell, a molecular neuroscientist at Rockefeller University in New York City, who penned a perspective accompanying the study. “The authors have discovered a new ribosomal release factor as well as a mutation in a brain-specific tRNA linked to neurodegeneration. Together, they highlight the importance of protein synthesis in maintaining healthy neuronal function.  The study also reveals the importance of mouse strain background effects”.

Louis Levinger, a tRNA researcher at York College of the City University of New York, agreed. “This is a nice work that brought together at least four different areas of research,” he said. “That is impressive breadth.”

“This changes my thinking about the protein translation process,” added van Hoof. “It was thought that a [single ribosomal release factor] takes care of stalled ribosomes. Now the question is whether there is specificity in taking care of ribosomal stalling and whether these factors have differential functions.”

Ackerman’s team is now addressing this and other questions, such as whether the tRNA-arginine mutation is responsible for other neurological phenotypes, and why neurons die when ribosomes are stalled.

The study also highlights the issue of strain background in mouse genetics studies. “This is a big problem in the field of neurodegeneration,” said Darnell. “Many researchers work with a single strain of mice and never question the effect of genetic background. This is really a wake-up call to the community. We need to create better guidelines for researchers so that mouse models for human diseases are used appropriately.”