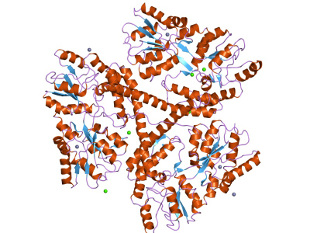 Aggregates of the Huntington’s disease-associated protein, huntingtin, can spread among neurons, according to a study published last month (July 13) in Nature Neuroscience, giving credence, experts suggest, to the idea that the propagation of mutant proteins may be a unifying feature of neurodegenerative diseases.

Huntington’s disease, a progressive neurodegenerative disorder that impairs both movement and cognition, is caused by dominant mutations in the huntingtin gene that lead to abnormally long stretches of the amino acid glutamine in the huntingtin protein. These proteins tend to clump in affected neurons, although whether the aggregates are a cause of neurodegeneration or perhaps some kind of cellular response to the mutant protein is still a matter of debate.

The huntingtin gene is expressed throughout the nervous system, so it is hard to tell whether huntingtin aggregates originate within the cells in which they are observed.

“This paper reports for the first time that mutant huntingtin can spread between neurons,” lead author F. Paolo Di Giorgio, who studies Huntington’s and other neurodegenerative diseases at the Novartis Institutes, told The Scientist.

Neurodegenerative diseases including Parkinson’s, Alzheimer’s, amyotrophic lateral sclerosis (ALS), and frontotemporal lobar degeneration have been shown to involve the propagation of aggregate pathology from cell to cell. Evidence is mounting that neurodegenerative diseases share mechanisms with prion diseases—exemplified by mad cow disease and its human counterpart, Creutzfeldt-Jakob disease, in which misfolded, deleterious proteins propagate over long distances and cause other molecules to misfold.

“This is the first time that diseases involving what are called polyglutamine-expanded proteins have been found to involve a process of transneuronal propagation,” said Albert La Spada, who studies neurodegenerative disease at the University of California, San Diego, School of Medicine and penned a companion article about the study but was not involved in the work. Polyglutamine expansion is a feature of eight neurodegenerative diseases, including Huntington’s, La Spada said. “That’s significant because it extends the scope of this mechanism more broadly across potentially all neurodegenerative diseases. That’s what makes this study particularly exciting.”

“Cells that bear these aggregates show abnormal pathology that is more pronounced [with] respect to cells that don’t bear the aggregates,” said Di Giorgio, “so it seems that when the neurons uptake mutant huntingtin—wild-type neurons that don’t carry any mutation—they will start to show signs of cellular atrophy.”

Huntington’s disease typically begins in the striatum, a brain region involved in movement control, and progresses to the cortex. To examine the way Huntington’s disease might affect this neuronal pathway, the researchers co-cultured striatal and cortical brain slices from wild-type and mutant mice. They found that when mutant cortical neurons and wild-type striatal brain slices were cultured together, functional neuronal connections formed between the brain slices, and mutant huntingtin spread to the wild-type neurons.

When researchers tried the reverse approach—linking mutant striatum and wild-type cortex—the two regions did not form neuronal connections, suggesting that mutant huntingtin within the striatum could disrupt corticostriatal connections.

To explore the corticostriatal pathway in vivo, the researchers used a virus to introduce the polyglutamine-repeat-encoding part of the huntingtin gene into the cortical neurons of wild-type mice. The neurons that were infected with the virus developed aggregates as expected, as did the striatal neurons with which the infected cells made connections.

Taken together, these results lend support to the idea that Huntington’s disease shares features with other neurodegenerative diseases, and with prion diseases.

“If neurodegenerative diseases have a unifying feature,” neurobehavioral geneticist X. William Yang from the University of California, Los Angeles, told The Scientist in an e-mail, “then understand[ing] the mechanisms or developing therapies against such common features may have more general implications/utility for all such disorders.”