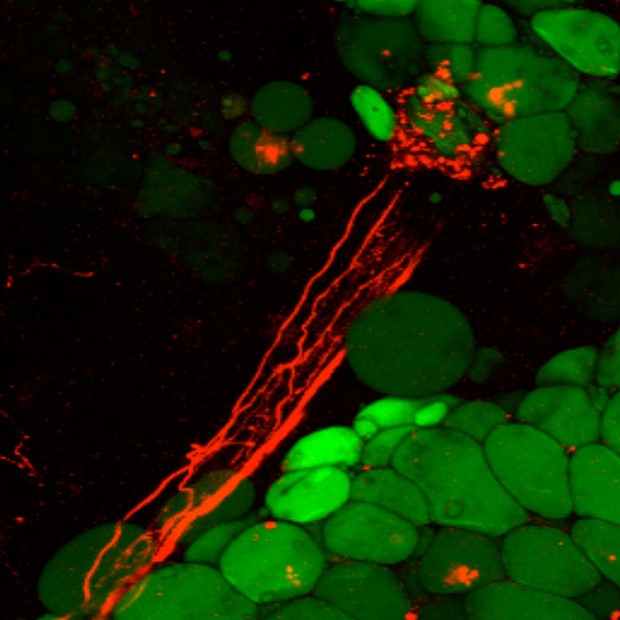 Adipocyte-targeting neurons (red) within adipocytes (green) in the mouse inguinal fat pad.ANA DOMINGOSThe hormone leptin, produced by fat cells, acts as a satiety signal to the brain, resulting in fat breakdown when levels are high. The hormone, present in proportion to the amount of fat tissue, is known to act on hypothalamic neurons in the brain to tell an animal when it’s full and to kick-start the breakdown of fat. Now, a team led by researchers at the Instituto Gulbenkian de Ciencia (IGC) in Portugal and the Rockefeller University in New York City have, for the first time, provided direct visual evidence that some sympathetic neurons from the brain indeed terminate within fat cells. The researchers also used optogenetics to stimulate these neurons within a fat pad in mice and cause the breakdown of fat. Their results were published today (September 24) in Cell.

“It’s a real tour de force that combines really modern optogenetic and tissue clearing approaches that are being developed to understand the central nervous system [CNS] and are here applied to understand the neural action outside the CNS and in the body,” said Paul Kenny, director of the Experimental Therapeutics Institute at Mount Sinai Hospital in New York who was also not involved in the study.

Previous studies using neuronal tracing methods provided indirect evidence that neurons should be found within white fat tissue because they could not distinguish between neurons that were just passing through the tissue and those that had axon terminals within adipocytes themselves. Nor was there direct evidence for the function of these neurons in fat breakdown.

In the current work, Ana Domingos of the IGC and her colleagues first visualized the 3-D anatomy and structure of a dissected mouse fat pad using an ex vivo optical tomography technique. The fat organ was first made transparent by removal of the fat which leaves behind the extracellular matrix, vasculature, and neural structures. “Adipose tissue is an organ but the only image we have of it is as a blob,” said Domingos. “I wondered what the blob looks like from the inside, if there is there an anatomical complexity that may give us insight into the physiology of the organ.”

The team found axon bundles penetrating the organ. Then, using two-photon microscopy to image deep within the tissue, the researchers were able to visualize neural axons terminating within adipocytes in an intact fat pad in a living mouse. The sympathetic neurons in fat were sparse—the researchers estimated that less than 8 percent of the adipocytes had direct contact with the nerves.

The researchers then used optogenetics to stimulate the sympathetic neurons within a fat pad in mice. They found that these neurons released norepinephrine upon stimulation, as did leptin treatment. Both manipulations resulted in lipolysis—the breakdown of fat tissue. Conversely, genetically ablating the neural connections to the adipose tissue eliminated the effect of leptin. According to Tamas Horvath, a professor of neurobiology at the Yale University School of Medicine who penned an accompanying perspective, this is the first study to apply optogenetic tools to probe the sympathetic nervous system.

While it was known that sympathetic neurons release norepinephrine and that adipocytes have receptors for norepinephrine, the source for the signaling molecule was controversial, as other sources of norepinephrine, such as the adrenal glands, are not required for weight loss, Domingos told The Scientist. “Finding these adipose junctions finally explains how adipose tissue receives its supply of norepineprhine in order to shrink the fat deposits,” said Domingos.

­Next, Domingos would like to find pharmacological ways to specifically activate these adipose-associated neurons, mimicking the effect of leptin as a potential treatment for obesity.

For Kenny, the work is another example of the increasing appreciation for the brain-body connection. “This paper is revealing the broader body and brain connection that we are beginning to better appreciate,” he said.

“Lipolysis is another example of a basic process that occurs outside the brain that can be powerfully influenced by what occurs in the brain,” Kenny added. “The brain doesn’t function in isolation but communicates with other organs in beautiful ways.”