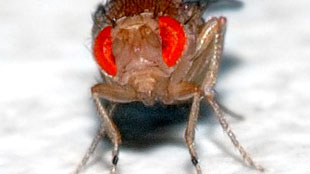 Wikipedia, Andre KarwathIn a fruit fly’s antennae, two neighboring neurons can stop each other from firing even if they do not share any direct connections, and help the insect to process smells, according to a study published today (21 November) in Nature. This means of communication, called ephaptic coupling, results when the electric field produced by one neuron silences its neighbor, instead of sending neurotransmitters across a synapse.

“[Ephaptic coupling has] been in the literature for a long time, but there are very few cases where these interactions have affected behavior in an actual organism,” said John Carlson, a Yale University biologist who led the study. “This is terra incognita.”

Jean-Pierre Rospars from INRA in France predicted the existence of these ephatic interactions in the sense organs of flies in 2004. “But nothing can replace a direct experimental proof as provided now by [this new study],” he...

In the antennae of Drosophila melanogaster, olfactory neurons are bundled into fluid-filled hairs called sensilla. Each sensillum contains two to four neurons, which are all tuned to different smells and grouped in specific ways. “A strawberry neuron might always be paired with a pear neuron, for example,” explained Carlson. “All these neurons have been very well characterized, so we know how they’re organised.”

Carlson’s student Chih-Ying Su focused on a sensillum called ab3, which contains two neurons—ab3A, which is sensitive to fruity methyl hexanoate, and ab3B, which detects banana-scented 2-heptanone. When Su exposed flies to a steady stream of methyl hexanoate, the A neuron fired continuously. If she wafted a brief burst of 2-heptanone, the B neuron spiked, and the A neuron suddenly shut down. The opposite also happened—a brief burst of activity in A silenced the steady activity of B.  Su found the same interactions in four other types of sensilla in the fruit fly, as well as one in the malarial mosquito Anopheles gambiae.

Despite these clear interactions, neurons within a sensillum do not share any synapses. Su confirmed this by showing that the neighboring neurons can inhibit each other even after a dose of synapse-blocking chemicals, even if their spiking patterns do not coordinate, and even if the antennae are severed, cutting off contact from any central neurons. Instead of synapses, the neurons are probably communicating via the fluid that surrounds them. When one fires, it creates an electric field that directly changes the flow of ions through the other and shuts down its electrical activity.

Although this ephaptic coupling has been seen in the cerebellum of rats, within a group of neurons called Purkinje cells, no one knew what effect it had. Su, however, has shown that it is strong enough to influence a fly’s behavior.

According to the authors, these responses could be useful to flies, which might be swamped by some local odor and need to detect faint hints of a new chemical blowing on the wind.

These experiments could change scientists’ understanding of chemical senses like smell and taste. For years, scientists believed that the brain is responsible for integrating the responses of different neurons, which individually detect the presence of different chemicals. But Su’s work shows that through ephaptic coupling, a fly’s neurons are already computing information about smells, before their signals ever reach the brain. “The neuron is another level through which olfactory computation can occur,” said Carlson.

The same thing might happen in humans too. Neurons in our tastebuds are organised in a similar way to those in a fly’s sensilla, for example. Does ephaptic coupling happen when we eat and drink? “That’s an interesting implication that I hope people will follow up on,” said Carlson.

Carlson also thinks that the discovery has practical value, as disease-carrying and crop-destroying insects use their sense of smell to find hosts and food. “Olfaction’s really important in the real world,” he said. “If you can inhibit the neurons that insects use to find humans and crops [by stimulating their neighbors], that could be very helpful.”