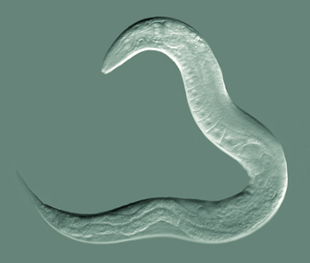 WIKIMEDIA, BOB GOLDSTEINEarly-life exposure to pathogenic bacteria can induce a lifelong imprinted olfactory memory in C. elegans through two distinct neural circuits, according to a study published today (February 11) in Cell. Researchers from Rockefeller University in New York City have shown that early-life pathogen exposure leads the nematode to have a lifelong aversion to the specific associated bacterial odors, whereas later-in-life exposure spurs only transient aversion.

“This study is very exciting,” said Yun Zhang of Harvard who studies learning in C. elegans but was not involved in the present work. “Imprinting is a form of learning widely observed in many animals [but] finding this in C. elegans is very meaningful because this nematode is genetically tractable, and its small nervous system is well described.”

A classic example of imprinting is how geese form attachments to the first moving object they see after birth; Nobel laureate Konrad Lorenz...

For the present study, Rockefeller’s Xin Jin and colleagues described a form of aversive imprinting in their C. elegans: newly hatched nematodes exposed to Pseudomonas aeruginosa PA14 or toxin-emitting Escherichia coli BL21 established a long-term olfactory aversion to it.  Animals that experienced the pathogen immediately after hatching were able to synthesize and maintain the aversive memory for the whole of their four-day lifespans, while animals trained in adulthood only retained the aversive memory for up to 24 hours.

C. elegans has an exceedingly compact nervous system with only 302 neurons (compared with 250,000 in the fruit fly Drosophila and 86 billion in humans). To understand which specific neurons were involved in the different stages of aversive imprinting, the researchers selectively and reversibly deactivated individual brain cells. Silencing the neurons AIB or RIM during the memory-formation phase prevented learning in the newly hatched nematodes, but silencing these same cells during memory retrieval showed no effect. The opposite was true of the neurons AIY and RIA: these cells could be silenced during memory formation with no effect, but were indispensable during memory retrieval.

The principle of separate neural circuits for memory formation and retrieval is far from unique to C. elegans. It was shown in humans through cases such as the famous patient “H.M.” who, following surgery that removed his medial temporal lobe, was able to retrieve old declarative memories but unable to form new ones.

“[The] idea that the transient learning signal would later be dispensable at the time of memory goes back as far as Pavlov. We’re just developing the idea at a different level of resolution to map it onto a physical site and not just a conceptual site,” said study coauthor Cori Bargmann. “It’s a surprise all over again that you can actually implement this in such a compact, little brain.”

Of course, memory formation and retrieval circuits must communicate with each other for learning to occur. The researchers found one molecular bridge between the circuits in the neurotransmitter tyramine, a homologue of adrenaline in mammals. Tyramine was released by the memory-formation neuron RIM and detected by the memory-retrieval neuron AIY; the neurotransmitter alone could replace the requirement for RIM activity in the C. elegans learning process.

“We often describe phenomenology and then speculate about the underlying machinery, but research in C. elegans—and especially this particular group—have really taken it to a different level, describing behaviors in great mechanistic detail,” said Harvard neurobiologist Bence Ölveczky, who was not involved in the research.

The present work is “really just the tip of the iceberg,” Jin told The Scientist. “Thanks to rapidly evolving modern genetics, neuromanipulation and imaging tools, we’re able to study causal effects of animal behaviors at a new level of precision. It’s an exciting time.”