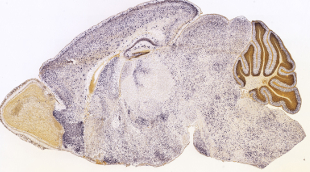 Using marijuana can sometimes compel a person to scoff down large quantities of food. A mouse study published in Nature today (February 18) may reveal part of the reason why. Researchers have found that cannabinoid-induced bouts of “the munchies” occur in mice when the compounds subvert brain cells that normally produce an appetite-suppressing hormone and redirect them to produce an appetite stimulator.

“All evidence, based on manipulations of the functions of these neurons, was consistent with their role in suppressing appetite—until this [paper],” said neuroscientist Scott Sternson of the Howard Hughes Medical Institute’s Janelia Research Campus in Ashuburn, Virginia, who was not involved in the study.

The cells in question, pro-opiomelanocortin (POMC) neurons, reside in the hypothalamus—the body’s homeostasis headquarters in the brain. When a person eats, these cells are activated to produce α-melanocyte stimulating hormone (α-MSH), which in turn promotes feelings of satiety....

“When you block the POMC neurons as a whole, by ablating them, deleting them, lesioning them, blocking MSH, or blocking MSH receptors in downstream targets of the POMC neurons, you get hyperphagia [over-eating] and morbid obesity,” explained Vanderbilt University Medical Center’s Roger Cone, who studies how the brain controls feeding, but was not involved in the work. “So there is no doubt that POMC neurons . . .  have a primary role in inhibiting food intake.”

Yale School of Medicine’s Tamas Horvath and his colleagues therefore reasoned that marijuana-induced munchies might be the result of reduced activity in these satiety neurons. But when the researchers gave mice the cannabinoid mimic arachidonyl-2’-chloroethylamide (ACEA), which prompts overeating, the animals’ POMC neurons were activated. “We were shockingly surprised,” said Horvath.

Furthermore, when Horvath’s team experimentally blocked POMC neuron activity, the animals no longer exhibited ACEA-induced overeating, which confirmed the cells were essential for the behavior.

Horvath was perplexed: “How could it be that all of a sudden the mechanism that acts like a brake becomes the accelerator?”

The answer was to come from treating POMC neurons with ACEA in culture. Instead of producing and secreting α-MSH, the neurons secreted β-endorphin—a hormone that, “when administered pharmacologically, has been shown to increase appetite,” explained Sternson.

Both β-endorphin and α-MSH are in fact derived, via cleavage, from the same precursor protein—POMC, after which the neurons are named. For this reason, Horvath had suspected long ago that POMC neurons might both stimulate and suppress appetite. However, he dropped this early theory after an abundance of experimental evidence suggested otherwise. Indeed, even when β-endorphin itself is deleted from POMC neurons in mice, said Cone, you get “animals that are hyperphagic and obese.”

“There’s always been a disconnect between the effects on appetite seen when we inject [β-endorphin] into a person or animal and what happens when we study the neurons that actually produce β-endorphin,” agreed Sternson. But understanding the pathways by which POMC neurons do stimulate eating might offer new targets for future appetite-boosting or -suppressing treatments, he added.

To that end, Horvath’s team has started to investigate the cellular mechanisms behind the behavior. The researchers have so far found that ACEA treatment increases the expression of mitochondrial uncoupling protein (UCP2), which regulates both feeding and hypothalamic mitochondrial activity. The team has further shown that UCP2 is essential for the ACEA-induced overeating behavior and the β-endorphin release by POMC neurons.

The team also found that a fraction of secretory vesicles in POMC neurons contain only β-endorphin or only α-MSH, suggesting the two pools of vesicles could be under differential control. However, exactly how ACEA-induced UCP2 activity is connected to differential packaging and secretion of the hormones remains unclear. “There’s still quite a bit to understand about the mechanism,” said Sternson. “It’s clearly something that people will have to dig into for some time to come.”