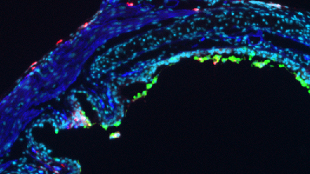 Influenza-infected mouse trachea: virus (green), neutrophils (red), collagen (blue)UNIVERSITY OF ROCHESTER, KIHONG LIM Part of the innate immune system, white blood cells called neutrophils circulate in the blood and are the first responders to an influenza respiratory infection, guiding T cells—part of the adaptive immune response—to the site. Neutrophils create a physical trail of chemokines that allow T cells to home in on the infection site, according to a study published today (September 3) in Science.

Using two-photon microscopy, Minsoo Kim, an immunologist at the University of Rochester Medical Center in New York and his colleagues visualized the mobilization of immune cells in response to an influenza virus-infection in the mouse trachea. The study is the first to track an immune system response to a flu virus in vivo.

“The paper goes very far, using an infection model to not only describe a phenomenon, but to clarify...

While the types of immune cells and their individual functions are increasingly well defined, how these cells interact and work together to fight pathogens has been difficult to study in live animals. It is well established that immune cells communicate with one another and with other tissues through messenger molecules called chemokines and cytokines. Cytokine messenger molecules made by innate immune cells in the blood are thought to help trigger T cells to differentiate into pathogen-specific killer cells. Chemokines  guide immune cells to a site of infection. Both infected tissues and immune cells secrete chemokines, yet how cells follow the trails of these immune cell-secreted peptides has not been clear.

In the current study, the researchers find that neutrophils are the first-responder cells, appearing in the trachea at infection day three or four. Using immunofluorescence in live mice, Kim’s team found that cytotoxic T-cells arrived in the trachea another few days later—about one week after the start of infection. Mice depleted of neutrophils had influenza-activated T cells. Yet these T cells did not efficiently home to the virus-infected epithelial cells of the trachea, and cleared their infection less efficiently, suggesting that an early-mounted neutrophil response in necessary for T cells to reach the infection site.

The team next identified CXCL12, a neutrophil-produced chemokine that could induce T-cell migration in vivo. Mice with CXCL12-depleted neutrophils had fewer T cells within the infected trachea and had a slower clearance of the virus, similar to the mice with reduced neutrophil counts.

Chemokines are thought to be soluble, diffusing throughout the blood and tissues. Yet, the researchers found that CXCL12 was not detected in soluble form within the viral-infected trachea. Instead, the chemokine was found peppered throughout the trachea encased in membrane bits released from the neutrophils.

In vivo imaging showed that the neutrophils formed long membrane strands as they migrated, leaving the membrane particles with CXCL12 behind.

“We are used to thinking about the gradients of secreted messengers, but what is amazing here is that the chemokines are actually stuck in the membrane that is laid down like a trail—that is quite extraordinary,” said Graham.

These fragments slowly diffused the chemokine, the researchers observed, creating a signal that attracted T cells. “The neutrophils leave behind these particles from their cell bodies. So even after the cells are long gone, they can communicate with the late comer T-cells,” explained Kim.

According to Sixt, that the innate immune system paves the way for an adaptive immune response likely extends to other pathogens. Yet there may be other chemokines in the neutrophil-deposited membrane bits that influence the type of antiviral or other pathogenic response. Cell migration mechanisms may also depend on the tissue infected, noted Graham.

For Kim, the phenomenon he and his colleagues have uncovered highlights the extent of collective behavior and shared information from animal species to the level of the cell. “This is individual cells sharing their experience and information to perform a team function,” he said.