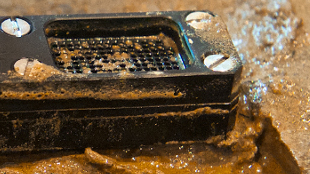 Many of the most widely used antibiotics have come out of the dirt. Penicillin came from Penicillium, a fungus found in soil, and vancomycin came from a bacterium found in dirt. Now, researchers from Northeastern University and NovoBiotic Pharmaceuticals and their colleagues have identified a new Gram-positive bacteria-targeting antibiotic from a soil sample collected in Maine that can kill species including methicillin-resistant Staphylococcus aureus (MRSA) and Mycobacterium tuberculosis. Moreover, the researchers have not yet found any bacteria that are resistant to the antibiotic, called teixobactin. Their results are published today (January 7) in Nature.

“When we saw no resistance [to the compound], my first reaction was that we had discovered junk that would be highly toxic,” said microbiologist Kim Lewis, director of Northeastern’s Antimicrobial Discovery Center. But mice treated with teixobactin after lethal doses of either MRSA...

That the antibiotic can kill M. tuberculosis “is a major breakthrough because it is virtually certain to be effective for the multi-resistant strains that are now all but impossible to treat,” said Richard Novick, a microbiologist at New York University Langone Medical Center who was not involved in the work.

Although further studies are needed before the antibiotic can be tested in humans, animal efficacy models are often predictive of a drug’s effects in humans, said Gerard Wright, director of the Institute for Infectious Disease Research at McMaster University in Hamilton, Canada, who penned an accompanying editorial.

Teixobactin was isolated from a previously unknown Gram-negative bacterium that lives in soil and cannot be cultured in the lab using standard techniques. So the researchers applied an approach called Ichip, developed jointly by Lewis and Slava Epstein’s lab, in which a soil sample is diluted with agar, and a single bacterial cell is suspended in a chamber surrounded with semi-permeable membrane. The researchers pack 96 such chambers into a single device, which they then place in soil—allowing the bacteria access to nutrients and growth factors but not to escape. This cultivation approach is an innovative way to tap into the rich biodiversity that we are currently missing because only 1 percent of microorganisms can be cultured in the lab, said Wright.  “This biodiversity is also hiding a lot of chemical diversity that may include other new antibiotics.”

“This is a very clever technique,” added Robert Austin, a physicist at Princeton University who studies the evolution of microbes and was not involved in the current study. “The bacteriology community needs to get away from culturing bacteria on agar plates, because this will not lead to new antibiotics.”

Rather than targeting a protein whose gene is mutable, facilitating resistance, teixobactin has two non-protein cell wall targets—highly conserved portions of two precursor polymers of peptidoglycan and cell wall teichoic acid. “[Teixobactin] binds to a motif that is highly conserved among bacteria and is not known to be modified in the bacterial kingdom,” said Lewis.

According to Lewis, resistance to teixobactin may take longer to emerge because the bacteria that produce the compound are Gram-negative, so there is no need for the species to have self-protecting teixobactin-resistance mechanisms. This means that there is nothing for the target bacteria to borrow by horizontal transfer, said Lewis.

“Teixobactin demonstrates that there are compounds that may have exceedingly low probability of resistance, providing us with a new strategy for antibiotic development,” he added.

Cambridge-based NovoBiotic Pharmaceuticals, which Lewis co-founded, is now using this cultivation technique to identify other potential antibiotic compounds and to develop a more soluble version of teixobactin.

Still, Austin emphasized that teixobactin resistance is likely to emerge. “Work we and others have done shows that bacteria can surprise us with the speed with which resistance can develop in complex environment. . . . I would caution people to not be overly optimistic until we see what happens in realistic clinical settings.”

“The rate of evolution of large-scale resistance will depend on the dosage and frequency of [the antibiotic’s use],” added Princeton microbiologist Julia Bos, a member of Austin’s laboratory.

Novick agreed. Assuming the antibiotic is efficacious and well tolerated in humans, “a drug like this must be reserved for serious diseases and not given to general practitioners to spread around like aspirin.”