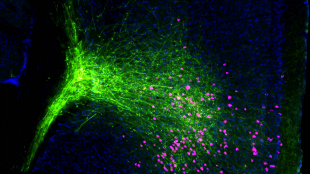 Although US and EU leadership have recently pledged millions of dollars to support the development of a comprehensive understanding of the neuronal connections throughout the brain, researchers have been toiling away at this goal for years. Most recently, a group from the University of Southern California (USC) has published a carefully constructed “connectome,” built from the analysis of hundreds of neuronal pathways in the mouse cortex. The work appeared today (February 27) in Cell.

“The one thing I really appreciate about this work is that it combines the large data scale with careful, manual annotation and analysis of the data,” said Pavel Osten, a neuroscientist at Cold Spring Harbor Laboratory (CSHL) in New York, who was not involved in the project.

A number of groups, including...

To build a cortical connectome, the researchers co-injected two tracers at two non-overlapping sites in healthy mouse brains, highlighting four pathways with different colors in each brain. At each of the two injection sites, one of the tracers labeled forward-projecting axons (the anterograde tracer), while the other labeled upstream neurons (the retrograde tracer). By tracing these four pathways, “they’re getting a lot of data from one mouse,” Osten told The Scientist.

Hintiryan pointed out that connections in the mouse cortex have been studied extensively, and the results of this study largely confirm what others had previously found. “What our paper provides is how these structures cluster together . . . and form subnetworks,” she told The Scientist. Following more than 300 injections into roughly 160 male mice, the team traced 240 different pathways within the cortex. Together, these revealed close to a dozen distinct networks.

Importantly, all of this work was done using standardized methods, and the results are now freely available online. “We put all our raw images online,” said Hong-Wei Dong, who led the work. “People might have different opinions to interpret the data, but because the raw data are there, they don’t have to rely on our interpretation—they can make their own.” Dong added that his team would like to have a completed map of the entire mouse brain within five years.

Having all of the data housed in one place will make it easy for researchers to investigate the connections within their region of interest. “It’s been a dream of us for a long time to merge large amounts of data in this sort of way,” said Joseph Price, a professor emeritus at Washington University in St. Louis who was not involved in the study. “They get a lot of credit for the effort of putting this large amount of data together and making it available on the web.”

Dong’s group is not the first to make a connectome database public, nor is the team’s resource the most comprehensive. The Allen Institute for Brain Science, for instance, hosts an ever-expanding public database of connectivity images captured from more than 1,300 injection sites across many regions of the mouse brain—with hundreds more to be added to the database in March. Although USC's and the Allen Institute’s projects are similar, “the scope is different,” said Hongkui Zeng, the senior director of research science at the latter. One important distinction is that the Allen Institute team is using transgenic mice to produce a cell type-specific connectome. Researchers at the Allen Institute are also using automated two-photon imaging, rather than conventional light microscopy as those at USC have done.

Still others are working toward developing an even more detailed map of the mouse brain. With “the connectome based on tracer injections, you don’t see synapses and you don’t get all the wiring across the brain because you’re averaging over many hundreds of individuals,” said Shawn Mikula, the project leader of the mouse whole-brain volumetric electron microscopy (EM) imaging group at the Max Planck Institute for Medical Research in Heidelberg, Germany. His group’s approach—imaging the brain cell by cell with EM—provides nanoscale resolution. But this is a monumental task, setting the project years behind the others.

As the community strives to have a complete understanding of the mouse brain’s neural networks, “I think the approach taken by these . . . projects are complementary to each other, all providing resources to the community,” Zeng told The Scientist.