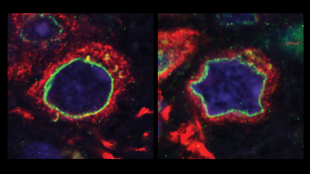 Altered nuclear morphology within brain tissue sample of Parkinson’s patient with a mutation in LRRK2 (right), as compared to cells of a healthy, age-matched control (left). Image courtesy of Merce Marti and Juan Carlos Izpisua Belmonte"There’s a new suspect in the search for the causes of Parkinson’s disease—deformities in the nuclear membrane of neural stem cells. Scientists observed the same defects, caused by a single gene mutation, in brain tissue samples from deceased Parkinson’s patients, suggesting that nuclear deterioration—and the mutation that drives it—could play a role in the pathology of the disease. The study, published today (October 17) in Nature, also shows that correcting the mutation reverses this phenotype, pointing to new ways to treat this cause of neurodegeneration.

“I don’t recall anyone ever suggesting this as a major phenotype [for Parkinson’s], so that’s really quite a big new direction for the field,” said Mark Cookson,...

Parkinson’s disease has traditionally been attributed to a loss of dopamine-generating neurons, which leads to the degenerative muscle control that is characteristic of the disease. But Parkinson’s also causes many other sensory problems, which cannot be explained by a dopaminergic mechanism.

Over the past 5 years, several groups have shown that disruption of the structure of the nuclear envelope—the lipid bilayer that separates nucleus from cytoplasm—is correlated with aging and certain age-related pathologies in the human brain, though the precise role of nuclear defects in the diseases remained unclear. Meanwhile, since 2004 scientists including Cookson have demonstrated that a mutation in the luceine-rich repeat kinase 2 (LRRK2) gene is correlated with Parkinson’s. However, the molecular and cellular mechanisms by which the LRRK2 mutation might drive disease progression remained a mystery.

To pin down the exact roles of the mutation and the nuclear envelope in Parkinson’s, Juan Carlos Izpisua Belmonte of the Salk Institute for Biological Studies in La Jolla, California, and his colleagues studied induced pluripotent stem cells (iPSCs) derived from Parkinson’s patients carrying the LRRK2 mutation.

As the iPSCs differentiated into neural progenitors and matured as neural stem cells (NSCs), the nuclear architecture of cells deteriorated progressively. By later stages of differentiation, the researchers observed misshapen, “pedal-like” nuclei. The mutant NSCs also failed to expand and continue differentiating into mature neurons as wild-type cells did. “The problems become obvious when we age the cell,” said Belmonte. A human embryonic stem cell (hESC) line with the mutation knocked in through gene editing also showed similar defects, suggesting that they were indeed related to the LRRK2 mutation.

To put the nail in the coffin, the researchers also generated an iPSC line with the mutation corrected. Sure enough, when the corrected iPSCs differentiated, they were normal. Moreover, the researchers were able to treat the mutant NSCs with a chemical compound known to inhibit LRRK2 kinase activity, which also resulted in the correction of the aberrant cellular characteristics. “We can correct these manifestations, revert the cell back to a normal stage and rescue phenotypes,” Belmonte said.

Belmonte’s team also looked at nuclear morphology in post-mortem tissue samples from the brains of Parkinson’s patients. Compared to age-matched controls, the diseased brains had a high proportion of cells with altered nuclear shapes similar to those the researchers had observed in mutant NSCs in vitro.

While it’s still unclear how this mutation and the resulting phenotypes lead to Parkinson’s, understanding the mechanism may not be necessary. Belmonte’s team fixed the phenotype in vitro, so he’s hopeful that transplantation of those cells into patients could help slow the course of the disease. “So we can correct and cure cells, so to speak, that in theory could be used for transplantation in the same patient,” he said.

Jeremy Nichols, who studies LRRK2 in his lab at The Parkinson’s Institute in Sunnyvale, California, is also positive about the potential therapeutic applications. “They corrected the mutation, but they also used a selective LRRK inhibitor [to reverse nuclear abnormalities], which is potentially a new leap forward,” he said. “[This] is a way for us to start asking questions about how we can use a selective small molecule to maybe reverse a disease phenotype for Parkinson’s.”