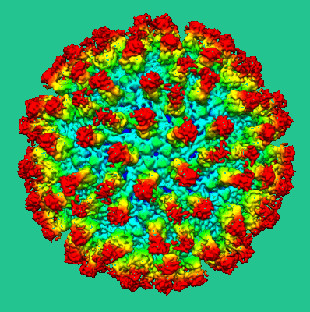 A reconstruction of dengue virus serotype 2 in complex with a human antibody fragmentEMBL-EBI, WANWISA DEJNIRATTISAI ET AL.A study of antibodies from the blood of patients infected with dengue virus has revealed a group of antibodies that recognize a unique envelope dimer epitope (EDE), which spans two protein subunits on the viral surface. Antibodies to EDE effectively neutralized all four dengue serotypes in cell culture experiments, an international team led by researchers at Imperial College London reported today (December 15) in Nature Immunology. The finding could guide strategies to develop a broadly protective vaccine against dengue, a mosquito-borne virus that infects about 400 million people per year.

Although only about 25 percent of people infected with dengue develop symptoms, the disease can lead to severe, and potentially lethal, hemorrhagic fever. Dengue is a growing problem in both developing and developed countries. Designing vaccines has been a long-standing...

“The shell of the virus is made up of a rather beautiful array of these envelope proteins all stacked together,” study coauthor Gavin Screaton of Imperial College London said during a press briefing.  “The antibody actually recognizes the junction between two of these proteins, so it will only recognize the protein when it’s made on the virus.”

Screaton and his colleagues amplified sequences encoding the antibodies from the B cells of seven patients, and produced a total of 145 recombinant antibodies in human embryonic kidney cells.  While 57 percent of these antibodies were able to bind to the dengue envelope (E) protein in immunoblot experiments, the rest could latch on only to the higher-level structure of an intact virion; a subset of these antibodies recognized all four viral serotypes.

To determine the specific protein structures recognized by each antibody, the researchers conducted epitope-mapping experiments using 65 distinct virus-like particles (VLPs), in which different surface-exposed residues were mutated to alanine, a generally non-reactive amino acid. The results suggested that many of the antibodies that did not bind to the E protein in immunoblots did in fact bind to a “footprint” at the interface of the two subunits in an E protein dimer.

The team also used cryo-electron microscopy (cryo-EM) to analyze the structure of VLPs in complex with the antigen-binding fragment from one of the antibodies. This result validated the idea that some EDE-binding antibodies recognize the interface between E proteins within a dimer, but did not rule out the possibility that other antibodies bind to adjacent subunits from different dimers, according to Shee-Mei Lok of the Duke-NUS Graduate Medical School in Singapore.

Using VLPs to assess binding specificities is imprecise, said Lok, a structural biologist who was not involved in the present work but has collaborated with study coauthor Cameron Simmons. “The particles are of different sizes. That means that the numbers of surface proteins are not the same,” she said—which could result in non-native protein arrangements. The particular antibody analyzed by cryo-EM “is definitely [binding] within the dimer,” but the initial VLP assay “may only pick up those that bind to dimers. It would be interesting to see if there is a skewed statistic, because you are looking for a certain population [of antibodies],” she said.

The researchers tested the ability of the various antibodies to neutralize dengue virus infection in cell cultures, and found that most of the antibodies to EDE resulted in at least 80 percent neutralization. In contrast, only one of the 83 antibodies recognizing the primary E protein structure achieved this level of neutralization, suggesting that EDE-binding antibodies may provide more potent protection.

Notably, the antibodies to EDE neutralized viruses produced in either insect or mammalian cells, which differ in their surface structures. Humans are initially infected by viral particles originating from a mosquito, but the vast majority of the viral load is made within the human host.

While this broad antibody reactivity could inform vaccine development, it remains to be seen whether EDE-binding antibodies can actually fend off the virus in vivo, said Katja Fink, who investigates immune responses to dengue at the Singapore Immunology Network. If the antibodies prove protective, “there might be ways to come up with artificial constructs, recombinant constructs that sort of imitate the virus, such that antibodies would be formed,” she added.

Compounding the vaccine development problem is a phenomenon called antibody-dependent enhancement: people exposed to one dengue serotype tend to experience more serious symptoms when infected with a second serotype, perhaps because antibodies to the first serotype allow for increased virus production.

A recent clinical trial of an experimental vaccine produced by Sanofi, which includes live attenuated versions of all four dengue serotypes, showed “partial protection against infection, but by no means an ideal response,” said Screaton. “What [our study] suggests is that it is potentially possible to provide cross-reactive immunity, and furthermore it means that we might be able to raise immunity against dengue using recombinant protein.”

Although other strategies may help to combat dengue, including antiviral drugs and colonizing mosquitoes with Wolbachia bacteria, “it’s likely that without a vaccine, this disease is not going to be controlled,” said Screaton.