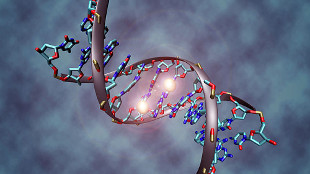 The epigenetic mark of DNA methylation, once thought to be rare if not nonexistent in worms and flies, occurs throughout the genomes of these organisms and in algae on the base adenine, not the cytosine known to be modified in mammals, according to a trio of papers published today (April 30) in Cell.

The results are “mysterious and exciting,” said Josep Casadesús of the University of Seville, Spain, who was not involved in the work. “The secret of these three Cell papers is that now there are technologies that can detect very low levels [of methylation] that were impossible to detect with the old methods.”

Both 5mC and 6mA DNA modifications were identified in the unicellular green alga Chlamydomonas reinhardtii in 1978, but their functions were unknown. In one of the new studies, researchers from the University of Chicago sequenced DNA isolated with a 6mA antibody, revealing that the epigenetic mark was concentrated near the transcription start sites of active genes. The scientists then used high-resolution cross-linking and restriction enzyme techniques to map 6mA sites throughout the C. reinhardtii genome. They found that the marks were mainly present in the linker regions between nucleosomes, suggesting that 6mA could play a role in determining the position of the histone complexes.

The Chicago team also collaborated with investigators from Harvard Medical School and the National Institutes of Health to provide the first evidence of DNA methylation in C. elegans. The scientists found that 6mA levels increase as fertility declines from generation to generation in worms lacking a functional histone demethylase. After identifying the DNA demethylase regulating 6mA, the researchers found that removing both the histone and DNA demethylases quickened the pace of transgenerational fertility loss, suggesting that 6mA and histone methylation may work together to transmit inherited information. Although the paper does not conclusively demonstrate transgenerational inheritance of 6mA, “the fact that adenine methylation occurs in C. elegans, plus the fact that it tracks transgenerational inheritance, makes it an attractive possibility that DNA methylation on adenine may be inherited,” said study coauthor Yang Shi of Harvard.

In the final paper, researchers from the Chinese Academy of Sciences (CAS) found high levels of 6mA on or near transposons in the early Drosophila embryo, particularly in the ovary. In collaboration with the Chicago group, the scientists identified DMAD, the demethylase responsible for removing 6mA during embryogenesis, and showed that the enzyme was required for germ cell differentiation. “We have uncovered a new DNA modification in Drosophila, and describe a potential role of the DMAD-6mA regulatory axis in controlling development in higher eukaryotes,” study coauthors Dahua Chen and Hailin Wang of CAS wrote in an e-mail to The Scientist.

Although 6mA may not play as broad a role as mammalian 5mC, “it’s very clear it plays important roles in specific times of development and in specific biological processes,” said Chuan He of Chicago, a coauthor on all three studies. “If nature evolves something, it tends to take advantage of it. I don’t think it just stops at the fly,” he added.

Although 6mA has not been found on mammalian DNA so far, new sequencing techniques may reveal previously undetectable modifications. “Maybe the case isn’t closed,” said Kian Koh of the University of Leuven, Belgium, who was not involved in the work. As an intermediate step, Koh suggested testing for 6mA on the DNA of zebrafish, a lower vertebrate model.

“Epigenetics has really blossomed in the last 10 to 15 years,” said Eric Greer of Harvard, a coauthor on the C. elegans study. “It’s not just the DNA code which is directing our cells.”