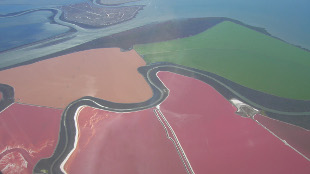 While mutation and sexual reproduction drive genetic innovation in many eukaryotes, for life’s exclusively unicellular domains—archaea and bacteria—horizontal gene transfer is a critical mechanism for gaining new traits. And genes acquired from bacteria appear to have played an important role in forming major taxa of archaea, according to a phylogenetic analysis of more than 25,000 archaeal gene families. The study, published today (October 15) in Nature, also suggests that genetic transfers from bacteria to archaea are at least five times more common than from archaea to bacteria.

“We tend to think of evolution as proceeding in a gradual fashion, with the drip, drip, drip of point mutations accumulating along different lineages, and that leads to differentiation and new species,” said study coauthor William Martin of the Institute for Molecular Evolution at Heinrich-Heine-Universität in Germany. Traditional phylogenetic...

About a third of the archaeal genes analyzed had homologs among bacterial genomes, and the phylogenies of these apparent genetic imports closely mirrored those of archaeal-specific genes in each of 13 orders of archaea, suggesting that the birth of each order coincided with the gene acquisitions. “It seems like for each major branch of the archaea, the pivotal event that led to the isolation and specialization of each respective clade was the acquisition of a large number of bacterial genes,” said Eugene Koonin, who studies evolutionary genomics at the US National Center for Biotechnology Information. Koonin has collaborated with the study’s authors but was not involved in the present work.

Martin’s team first applied this analysis method to demonstrate that the salt-loving haloarchaeal group arose in concert with the acquisition of more than 1,000 bacterial genes, which conferred the ability to respire aerobically, among other metabolic functions. This analysis, published in PNAS in 2012, involved computing phylogenetic trees for 1,500 gene families. Constructing 25,000 trees for the present study was considerably more computationally intensive. “It’s a massive analysis—probably one of the larger tree-crunching exercises ever undertaken,” said W. Ford Doolittle of Dalhousie University in Canada, who was not involved in the study.

In particular, the phylogenies revealed that 83 percent of the bacterial introductions occurred in methanogenic archaea, which are thought by some to be the most ancient groups of archaea and have a simple metabolism—anaerobic reduction of carbon dioxide to methane in the presence of hydrogen gas. “People have suspected [the bacterial origin of many methanogen genes] for awhile,” said Doolittle. “Way back 15 years ago, when methanogen genomes started appearing, [these microbes] were the record holders for apparent import of bacterial genes.”

The conclusion that archaeal lineages abruptly picked up large groups of bacterial genes at the time of their formation, though supported by statistical tests, will require further analysis, Koonin noted. But the fact that 39 percent of the genetic imports analyzed by Martin’s team are involved in metabolism reinforces this idea. “It doesn’t make sense to incorporate one gene for the respiratory chain and not the others,” said Doolittle. “So biologically speaking, if they weren’t incorporated all at once, there would be no potential of incorporating some of them one at a time.”

R. Thane Papke of the University of Connecticut agreed that, while intriguing, the conclusions are not fully validated by the present analysis. “They’ve got some broad brushstrokes, it looks convincing, and I’m excited about it,” said Papke, who was not involved in the study. “More work just needs to be done.”

If the results hold up to further inquiry, however, the implications for scientists’ understanding of the early evolution of microbes could be huge. Martin compares the large-scale gene acquisitions in archaea to the origin of eukaryotes, which may have occurred when an archaeal cell incorporated a bacterial cell (along with its genes), which became the mitochondrion. “If this is widely accepted, it makes the origin of eukaryotes not as special,” said Doolittle. “That would be quite a paradigm shift in the way we think about things, because most people regard the origin of eukaryotes as a uniquely almost miraculous event.”