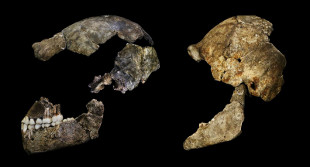 H. naledi skull specimensJOHN HAWKSThere are numerous different species for nearly every type of animal alive today—dozens of different whale species and thousands of ant varieties for example, yet there’s only one species of human. That wasn’t always the case, of course. In the distant past there were at least nine animals in our genus, Homo, including H. erectus, H. habilis, and Neanderthal. Now scientists have discovered a new species to add to our family tree, H. naledi.

From deep inside a nearly inaccessible cave, researchers in Southern Africa excavated 1,550 bone fragments belonging to H. naledi—more hominin fossils than had been discovered in the previous 90 years of exploration in the region. The bones come from at least 15 individuals, male and female, of various ages. “If you are an anthropologist this is as good as it gets,” said John Hawks, a professor...

Hawks and his colleagues describe the shoulders, chest, and pelvis of H. naledi as primitive in morphology, similar to Australopithecus and other early hominin species that existed up to 4 million years ago.  H. naledi’s cranial capacity is between 465 and 560 cubic centimeters, roughly a third of the brain size of modern humans and the smallest in the genus, the researchers wrote.

However, other features of this new species appear more modern. H. naledi is similar in overall size and weight to small-bodied H. sapiens. Study coauthor Lee Berger of University of the Witwatersrand in Johannesburg, South Africa, told The Scientist: “the feet are practically indistinguishable from modern humans. This is a walker.”

“H. naledi possesses a combination of primitive and derived features not seen in the hand of any other hominin,” the authors wrote, but Carol Ward, a professor of pathology and anatomical sciences at the University of Missouri who was not involved with the study said she was disappointed by the lack of empirical data presented in the paper. “There are only tiny composite pictures of the fossils, so you can’t see them and there are no comparative data comparing it to anything else,” said Ward. “There’s nothing we can use to make our own judgments about the validity of what they are saying.”

The team has not yet been able to determine an approximate age for the fossils. Ward said this information will be key to interpreting their significance to human evolution. “It’s an amazing collection of fossils, unprecedented and stunning,” she said, “but without a date, they don’t tell us much other than there was another kind of hominin out there.”

See “Behind the H. naledi Find”

In an associated paper also published in eLife today, Paul Dirks of James Cook University in Townsville, Australia, and his colleagues described the remote cave in which the H. naledi fossils were found. To reach the ancient specimen-rich chamber, researchers had to squeeze through a tiny gap just 7.5 inches wide. The remains appear to have arrived in the cave fully intact and decomposed after deposition. Researchers found no indication of predation.

The researchers suggested that the nearly inaccessible location of the fossils, plus their abundance and intact condition, all point to one explanation—purposeful burial, something only modern humans are known to do.

William Jungers, chair of anatomical sciences at Stony Brook University in New York who was not involved with the study, cautioned against attributing too much meaning to the notion of intentional burial. “Dumping conspecifics down a hole may just be better than letting them decay around you,” he said. Jungers added that there may once have been another, easier to access, entrance to the cave.

Ward is also skeptical of the intentional burial explanation. “If it’s really that hard to get to the cave, how do you get to that long dark cave carrying your dead grandmother?” she asked.

The significance of H. naledi is likely to remain controversial until an approximate age for the fossils can be determined. No matter their age, Berger is confident that “this fossil will be probably one of the best known hominin species discovered in the history of this science,” he said.