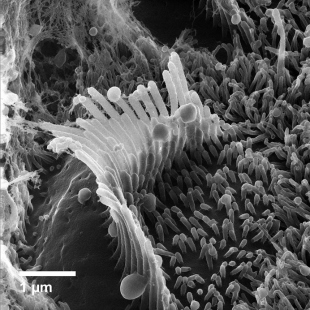 A bundle of stereocilia from a rat earFLICKR, ZEISS MICROSCOPYFor decades, scientists have been trying to pin down the channel in ears’ hair cells that converts mechanical energy from sound waves to an electrical message in the brain. Yet for all the work numerous labs have put toward identifying this so-called mechanotransduction channel, it has remained out of reach. Scientists have now identified another piece of the puzzle, a protein called TMIE that is essential for mechanotransduction and that localizes to just the right spot in the cell. Their results were published in Neuron last week (November 20).

“This new paper locks down that TMIE is involved in mechanotransduction,” said Peter Barr-Gillespie of Oregon Health & Science University who did not participate in the study. What remains unknown, however, is whether TMIE is an accessory to the pore-forming part of the channel or actually part of that...

The basic structure of hair cells includes a finger-like protrusion called a stereocilium. Each stereocilium is connected to its neighbor stereocilium by a “tip link,” an extracellular filament that triggers the activity of the mechanotransduction channel when the tip link moves in response to sound waves coursing through the cochlea. At one end of the tip link is the protein cadherin 23; at the other end—adjacent to the channel—is the protein protocadherin 15.

Several other proteins have been pegged to the mechanotransduction complex. Last year, for instance, Jeffrey Holt’s team at Harvard Medical School showed that TMC1 and TMC2, a pair of transmembrane proteins, are essential for mechanotransduction in mouse hair cells. Ulrich Müller of The Scripps Research Institute in La Jolla, California, and others have also shown that another protein, LHFPL5 (also known as TMHS), is a member of the mechanotransduction complex. But they, like Holt, have been unable to prove that these proteins are components of the pore of the channel, so the search has continued for other players.

In this latest study, Müller and his colleagues performed a screen in yeast to find other transmembrane proteins that interact with protocadherin 15 or LHFPL5. TMIE appeared in both screens.

“We got excited about this because TMIE was already known to be a deafness locus in humans,” Müller said. The researchers went on to show that TMIE is essential for proper mechanotransduction and that it appears to reside at the location of the channel. The authors suspect that TMIE links LHFPL5, protocadherin 15, and the transduction channel.

“I think it is highly significant,” said Tony Ricci, a mechanotransduction researcher at Stanford University who was not involved in the study. “We’re finding there are a lot more proteins up there than maybe initially were first thought.”

Whether any of these mechanotransduction-associated proteins are members of the actual channel pore, however, remains to be seen. Although some may move to the membrane in cell culture, they don’t pull together to form a conductance pathway in vitro. It could be that some proteins involved in assembling the channel are missing or, perhaps, additional subunits are still unidentified. “I think there are other pieces that have yet to be found,” Holt told The Scientist.

Part of what has plagued this field is the striking lack of material scientists have to work with. Holt pointed out that in the human cochlea there are only 16,000 hair cells, each with 50 to 100 transduction complexes. “Biochemical approaches have been quite challenging,” he said.

Müller is optimistic that the field is close to closing in on the identity of the channel. “It’s remarkable. For a long time nobody could get anything, now we have three clear components of the transduction complex.”