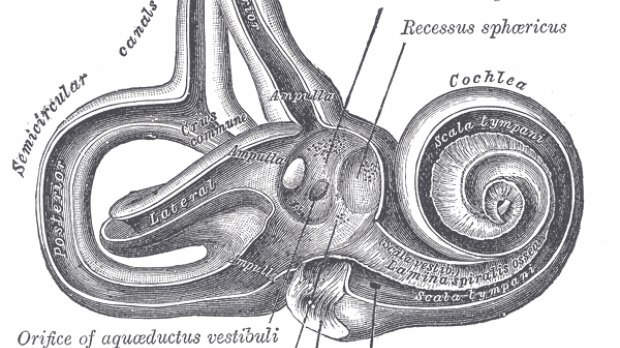 WIKIMEDIA, HENRY GRAYMutations in the gene PJVK and resulting deficiencies in the gene’s protein product, pejvakin, impair inner ear cells’ ability to respond to oxidative stress brought about by noise, making them vulnerable to damage, according to a study published today (November 4) in Cell. The results present a new mechanism for the most common environmental cause of hearing loss—injury from noise.

The findings also offer opportunities to explore therapies for people affected by these mutations, study coauthor Christine Petit of the Institut Pasteur and the Collège de France told The Scientist. “I think what should be done immediately is propose the use of antioxidants,” she said, and look into developing a gene therapy to correct for the loss of pejvakin.

About a decade ago, Petit’s team identified the PJVK gene as being associated with deafness in certain families. It was another in a growing heap of...

“Initially, we were very [confused] by the heterogeneity,” said Petit. Adding to the mystery was that the function of the gene, PJVK, was unknown. To understand the molecular and cellular consequences of PJVK mutations, Petit’s team developed a mouse model lacking pejvakin. The first striking observation was that the animals were hypervulnerable to sound. Exposure to the equivalent of one minute in a night club raised their hearing threshold and affected sound responses in neurons and sensory cells of the inner ear and in neurons of the brain.

“Most previous studies focused on high-level noise,” said Bohua Hu of the State University of New York at Buffalo who was not involved in the research. “This study shows that even lower-level noise, even the click that’s commonly used to provoke the auditory brainstem response, can change the functional status of the cochlea. It’s an interesting finding.”

Petit and her colleagues conducted a similar experiment in five people with pejvakin deficiencies and found the same thing: inner ear and brainstem responses declined to sounds after a period of exposure. Petit said this could have implications for hearing aids and cochlear implants, which are commonly used to treat hearing loss. In patients with PJVK mutations, amplifying sounds through these devices may actually be doing more harm than good. “The more we stimulate, the more we destroy the system,” she said. “We think that in the future all patients should be screened for pejvakin defects, for mutations in these genes, before cochlear implantation or hearing aids.” It’s not clear how common these mutations are, she said; they appear more frequently among people from Iran, Turkey, and Asia.

Contributing to the hypersensitivity of pejvakin-deficient cells to sound is their inability to mount an appropriate defense against noise-induced oxidative stress, the researchers found. In normal mice, an hour of loud sound exposure led to increased pejvakin levels in their inner ears. The noise exposure also led to an increase in the number of peroxisomes—enzyme-filled organelles involved in reducing oxidative stress—in inner ear hair cells and auditory neurons. Mutant animals lacking pejvakin showed no increase in peroxisomes and subsequently suffered hearing loss following loud noise.

Both oxidative stress and peroxisome problems have been fingered previously as a part of noise-induced hearing loss. Petit’s study brings those two concepts together in the context of a single gene mutation.

“I think that that link between a single gene mutation in humans and the mouse model leading through to noise-induced damage . . . is really interesting,” said Karen Steel, a geneticist at King’s College London who did not participate in the study. “People don’t tend to think about, ‘Well, what can a single gene mutation tell you about a common environmental problem like noise-induced damage?’ But this actually makes that link in one paper, which I think is really impressive.” Steel said it will be interesting to see if pejvakin deficiencies underlie the noise-induced hearing loss that becomes common as people age.

Petit’s team is now working to see if artificially introducing pejvakin into mice will rescue their hearing defects, and whether oxidative stress is necessary for pejvakin’s protective effects. “Basically, what we want is to decipher the signaling pathway to be able to detect what will be the best target for therapeutic approaches and to implement a molecular diagnosis for pejvakin.”