Researchers renamed, reshuffled, and revealed species from every corner of the living world this year. DNA analyses and behavioral data helped scientists unlock the secrets of some of these species, while others were completely new to science. 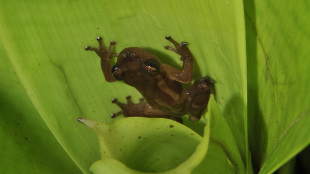 A new species of treefrog from Brazil does something special: while its cousins spend their tadpole stages in ponds or swamps, Dendropsophus bromeliaceus grows up in the rainwater collected in various types of bromeliad plants. Based on this observation, “the new species can be distinguished from all known congeners,” a team of researchers from South America explained in a PLOS ONE paper published this month (December 9).

The frog differs from its Dendropsophus relatives in appearance as well as lifestyle, with a different color pattern on its back and shorter webbing between its fourth and fifth toes, among other qualities. DNA analyses confirmed that the amphibian is...

The researchers first discovered the treefrog in the mountains of Brazil’s Atlantic Forest. “While surveying for frogs inside bromeliads on rocky outcrops in the municipality of Santa Teresa, we found a distinct treefrog jumping out of an epiphytic bromeliad,” they wrote in the report. The authors gave it the common name Teresensis’ bromeliad treefrog to reflect its origin. 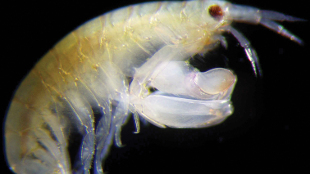 From inside the branchial chambers of a tunicate, a new species of amphipod has emerged in Indonesia. James Thomas from the National Coral Reef Institute in Florida named and described the species, Leucothoe eltoni, in ZooKeys this summer (August 25).

Thomas named the species for Elton John because of its large “shoe-like” front appendage, which reminded him of the oversized boots that John wore in the 1975 movie Tommy. “I have listened to his music in my lab during my entire scientific career,” Thomas said in a press release.

Thomas and his colleagues from the Naturalis Natural History museum in the Netherlands discovered L. eltoni while collecting other specimens from coral reefs throughout Raja Ampat, Indonesia. They found L. eltoni most often in tunicates, but also in bivalves and sponges.

The new species is native to coral reef habitats in Indonesia and the Philippines; it has also been noted as an invasive in Hawaii, where it was misidentified in 1997 as another amphipod (Paraleucothoe flindersi). “The most likely vector for introduction was a dry dock, USS Machinist, transported to Pearl Harbor from Subic Bay, Philippines in 1992,” Thomas noted in his paper. 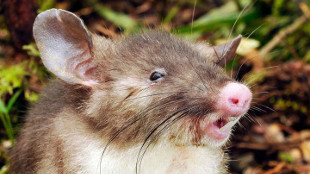 On an isolated Indonesian island, a team of international researchers discovered the hog-nosed shrew rat (Hyorhinomys stuempkei). The team described the new species in the Journal of Mammalogy this fall (September 29).

The researchers first captured two of the rodents in 2013. On the second morning of their field season on Sulawesi Island, Jake Esselstyn of Louisiana State University (LSU) and Kevin Rowe of Australia’s Museum Victoria both caught these animals in their traps. “We had never seen anything like this. It was obviously a new species,” Esselstyn said in a press release. “We came back to camp and were both surprised that the other one had it as well.”

Not only is this hog-nosed shrew rat a new species, it represents a new genus as well. The rodent has a flat pink nose, long incisors, and long urogenital hairs, which differentiate it from its cousins. H. stuempkei is the third new rodent the team has described from Sulawesi. “I am still amazed that we can walk into a forest and find a new species of mammal that is so obviously different from any species, or even genus, that has ever been documented by science,” Rowe said in a press release. 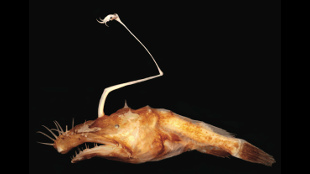 In response to the Deepwater Horizon oil spill in the Gulf of Mexico, marine biologist Tracey Sutton of Florida’s Nova Southeastern University began studying the sea life there at extreme depths. On a research trawl, he retrieved three female specimens of a new anglerfish species, Lasiognathus dinema. Along with his colleague, Theodore Pietsch of the University of Washington, Sutton described the first this summer (June 4) in Copeia.

“Every time we go out on a deep-sea research excursion there’s a good chance we’ll see something we’ve never seen before—the life at these depths is really amazing,” Sutton said in a press release.

He pulled the spiky new fish up from between 1,000 and 1,500 meters below the surface. It’s distinct from other Lasiognathus anglerfish due to the curved appendages on its lure; two threadlike extensions give the fish its name, combining the Greek words di for “two” and nema for “thread.” Like other anglerfish, it’s also quite small; even the largest L. dinema specimen was less than four inches long. The new discovery is the first report of an anglerfish from this genus in the Gulf of Mexico.