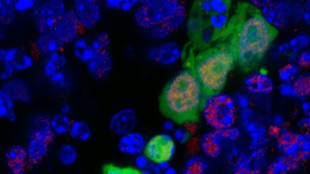 Scientists have isolated and defined a new type of pluripotent cell from early mouse embryos and from monkey and human stem cell lines. The monkey- and human-derived versions of these pluripotent cells can divide and generate the three germ layers in a developing mouse embryo, providing the first demonstration that human pluripotent cells can begin a differentiation program inside mice. In their May 6 Nature paper reporting these results, developmental biologist Juan Carlos Izpisua Belmonte of the Salk Institute for Biological Studies in La Jolla, California, and his colleagues suggested that these newly identified cells may be useful for modeling early human development and might in the future be used to generate tissues and organs for clinical applications.

The findings, said Paul Knoepfler, a stem cell biologist at the University of California, Davis, who was not involved in the work, “fit nicely into a broader concept that there are going to be ‘intermediate state’ stem cells that don’t fit so easily into binary, black-and-white ways of classifying [pluripotent cells].”

These so-called novel region-selective pluripotent stem cells (rsPSCs) are further differentiated compared to previously isolated stem cells and have more favorable characteristics for laboratory manipulation, including high cloning efficiency, stable passage in culture, and ease of genetic engineering. “All of these are advantages for applications in research and, potentially, scaling up for clinical applications,” said Daley.

“We believe that [rsPSCs] should have the ability to differentiate more efficiently into somatic cells . . . because they are right at the junction of pluripotency and differentiation,” said study coauthor Jun Wu, a research associate in the Belmonte lab.

In the post-implantation mouse embryo, cells are already distinguished into anterior, posterior, distal, and proximal functional orientations. The researchers sought to determine whether they could capture a cell type from the post-implantation embryo with distinct properties conferred by one of these spatial orientations. The team focused on isolating and culturing posterior cells where gastrulation occurs in the early embryo.

Wu and his colleagues found that a combination of serum-free media plus fibroblast growth factor 2 (FGF2) and Wnt signaling inhibitors resulted in stable rsPSCs.

The transcriptomes of these cells resembled those of the posterior cells of the early mouse embryo, and grafting these cells into 7.5-day-old mouse embryos resulted in efficient incorporation in the posterior, but not the other parts of the embryo. After 36 hours of culturing these chimaeric embryos, the rsPSCs proliferated and could differentiate into the developing three germ layers. The results of this 36-hour embryo incubation assay suggest that rsPSCs have the potential to fulfill their developmental program in vivo, said Jun.

A distinguishing feature of naive ESCs compared with primed EpiSCs is their ability to efficiently form colonies from single cells—a trait called high clonagenicity. Yet even though rsPSCs resemble cells from post-implantation embryos, just like the EpiSCs, these cells readily formed clones. RsPSCs also produced smaller teratomas—tumors that resemble embryos, including tissues from all three germ layers—when injected into mice. And while conventional human ESCs could not, human rsPSCs could also be grafted into the mouse embryo and form all three germ layers.

“The high clonal efficiency was surprising, as was the data that these cells form smaller teratoma,” said Knoepfler. “Anything that forms a smaller teratoma would have a potentially better safety profile for clinical applications,” he added.

The authors notes that human and nonhuman primate ESC lines could be used to create rsPSCs with similar characteristics to the mouse cells, including improved cloning efficiency.

Because of the ethical limitations of working with human embryos, the standard functional test for pluripotency of human stem cells is the mouse teratoma assay. “We are excited that this is the first demonstration that [human stem cells] can enter into the early developmental program of another species,” said Jun.

Whether human rsPSCs can generate more complicated tissue structures within mice or other animals requires further study, Belmonte told The Scientist via e-mail. “Of course,” he noted, “the ethical implications behind creating a human-animal chimera for the purpose of obtaining human tissues and organs to save lives of millions needs to be carefully evaluated.”

Daley pointed out that this study is not the first to describe a novel pluripotency state. But these studies have been the subject of some controversy because the cells have been unstable in culture, and independent laboratories have struggled to reproduce the reported results.

“It remains to be seen whether these conditions for rsPSCs are reproducible, [but] it looks like [the authors] were very effective in isolating these cells,” he said. “The fact that this works across the spectrum of mammals suggests that it is a pretty stable state.”

That changing culture conditions can generate different kinds of stem cells is not surprising, said Knoepfler, but it is exciting. “I expect that more new cell types will be found in the future,” he said.

Clarification (May 6): This article has been updated to clarify: Daley pointed out that this study is not the first to describe a novel pluripotency state.