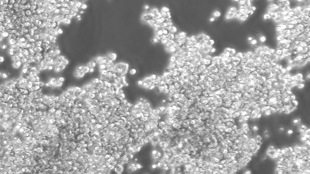 F-class cellsLUNENFELD-TANENBAUM RESEARCH INSTITUTE/PETER D. TONGEResearchers from Mount Sinai Hospital’s Lunenfeld-Tanenbaum Research Institute and their international colleagues have uncovered a new type of pluripotent mouse stem cell—the “F-class” cell—through use of a somatic cell reprogramming approach. An F-class cell is able to differentiate into all three embryonic precursor tissues, yet is phenotypically and molecularly different from previously characterized induced pluripotent stem cells (iPSCs) made from somatic cells. These F-class cells proliferate more quickly than other stem cells in vitro, and are characteristically low-adhesion, giving them a fuzzy appearance. The results are published today (December 10) in Nature.

“What I find particularly exciting is that this opens up the idea that there may be different kinds of pluripotent stem cells,” said Paul Knoepfler, a stem cell biologist at the University of California, Davis, who was not involved in the work.

A second Nature paper published today provides a detailed map of the pathways somatic cells can take to different pluripotent states through reprogramming, including those required to arrive at the F-class state. Maintenance of F-class cells requires higher levels of the same transcription factors (TFs) needed to create iPSCs originally described by Japanese scientist Shinya Yamanaka, who was a co-recipient of the 2012 Nobel Prize in Physiology or Medicine in recognition of this work. The steady, high-level expression of TFs, including Sox2 and Oct4, results in a distinct epigenetic, transcriptomic, and proteomic profile of F-class cells. These newly derived cells were also found to maintain a repressed gene state through less global histone H3 lysine 27 trimethylation than in somatic cells, but much more than that found in embryonic stem cells (ESCs).

Together with three additional papers published today in Nature Communications, the aforementioned studies comprise the detailed work of the international Project Grandiose, an effort led by Andras Nagy, a stem cell scientist at Lunenfeld-Tanenbaum. Nagy’s team painstakingly analyzed iPSC reprogramming by taking cell samples every few days. The three other papers map the genome-wide RNA, protein, and epigenetic changes that occur during the transition from mature to pluripotent cells. The resulting data sets are publicly available at Stemformatics.

Whether these F-class cells naturally exist in the mouse embryo is not yet clear. Nagy said he believes these cells likely only exist in vitro, as producing them required high expression of the four transgenes. But this does not diminish their potential utility, said Nagy. “It is really exciting because you can think creating designer cells, that if we understand their biology deeply enough, will have therapeutic value.”

“In some ways, F-class cells are a prototype of stem cells for disease research and therapeutic approaches: they grow faster and under simpler conditions than iPS cells,” study coauthor Thomas Preiss, a molecular biologist at the Australian National University in Canberra told The Scientist in an e-mail. “It was amazing to discover how cell that so distinct on a molecular level can each be pluripotent.”

The team’s next step is to produce human F-class cells. The researchers also seek to determine whether F-class cells can be differentiated into functional cell types.

“[These data] will help us to understand what reprogramming is all about,” said Knoepfler. “There is still a lot more to learn about the differentiation potential of these cells. . . . We need to understand how they behave.”