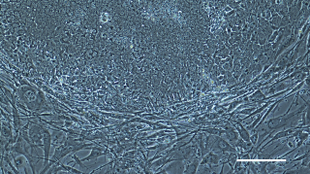 A a colony of human ESCs (upper portion) extracted from a blastocyst generated by SCNTCELL/TACHIBANA ET AL.Researchers have for the first time produced human embryonic stem cells (hESCs) using somatic nuclear transfer (SCNT), a method in which the nucleus of a donor cell—in this case a skin cell or fibroblast—is transferred to an egg cell whose own nucleus has been removed.

The work, published today (May 14) in Cell, opens up the possibility of an alternative source of patient-specific stem cells to help scientists understand disease and develop personalized cell-based therapies. What’s more, hESCs produced via nuclear transfer (NT-hESCs) may not have the genetic and epigenetic abnormalities found in induced pluripotent stem cells (iPSCs), made by adding key genes to reprogram adult cells.

“I think it is a beautiful piece of work,” said George Daley of Boston Children’s Hospital and the Harvard Stem Cell Institute, who...

SCNT has previously been used to clone animals and to successfully reprogram somatic cells into ESCs is mice and primates, but little is known about how it works and which factors in the egg cell are responsible stimulating the reversion of the implanted mature nucleus to a pluripotent state.

Moreover, all previous attempts to produce NT-ESCs have failed. Researchers have been unable to get human SCNT embryos to progress past the 8-cell stage, never mind to the 150-cell blastocyte stage from which hESCs can be plucked. The causes of the roadblock are not clear, but likely involve certain key embryonic genes from the donor cell nucleus that could not be activated.

To overcome these obstacles, Shoukhrat Mitalipov of Oregon Health and Science University and colleagues first examined failed attempts with human cells and successful work in rhesus macaques to identify factors that could be responsible.

The researchers evaluated various activation and culture protocols that led to successful SCNT reprogramming in monkeys, and set about testing various combinations on human oocytes. They found that the optimized protocols that worked in monkeys also worked in humans. In particular, the incorporation of caffeine into the cocktails of chemicals used during host nucleus removal and donor transplantation and the use of electrical pulses to activate embryonic development in the recipient egg improved cellular reprograming and blastocyte development, allowing human SCNT embryos to reach a stage that yielded hESCs.

“[The researchers] worked diligently to overcome the early embryo blockade that we and others have confronted as a barrier to human SCNT,” said Daley. “Their distinct culture media, which was supplemented with caffeine, and their optimized activation protocol appears to have been the needed breakthrough.”

“It was a huge battery of changes to the protocols over a number of different steps,” said Mitalipov. “I was worried that we might need a couple of thousand eggs to make all these optimizations, to find that winning combination. But it actually took just 128 [eggs], which is a surprisingly low number to make 6 [hESC] lines.”

The researchers then analyzed four of these cell lines and found that their NT-hESCs could successfully differentiate into beating heart cells in vitro and into a variety of cell types in teratoma tumors on live mice. The cells also closely resembled those derived from fetal fibroblasts, had no chromosomal abnormalities, and displayed fewer problematic epigenetic leftovers from parental somatic cells than are typically seen in iPSCs. Mitalipov said more comparisons are required, however.

“We are now left to analyze the detailed molecular nature of SCNT-ES cells to determine how closely they resemble embryo-derived ES cells and whether they have any advantages over iPS cells,” added Daley. “iPS cells are easier to produce and have wide applications in research and regenerative medicine, and it remains to be shown whether SCNT-ES cells have any advantages.”

But Milatipov pointed out one fundamental difference: while their nuclear genome comes from the donor cell, NT-hESCs contain mitochondrial DNA (mtDNA) from the egg cell. So unlike in iPSCs, nuclear transfer not only reprograms the cell but also corrects any mtDNA mutations that the donor may carry, meaning that patient-specific NT-hESCs could be used to treat people with diseases caused by mitochondrial mutations. “That’s one of the clear advantages with SCNT,” Milatipov said.