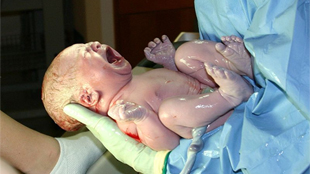 WIKIMEDIA, ERNEST FFrom the sterile world of the womb, at birth babies are thrust into an environment full of bacteria, viruses, and parasites. They are very vulnerable to these infections for their first months of life—a trait that has long been blamed on their immature immune systems.

But Shokrollah Elahi from the Cincinnati Children’s Hospital Medical Center has shown that, at least in mice, this susceptibility is the work of special cells that actively suppress immune responses in newborns. This raises their risk of diseases, but it also creates a window during which helpful bacteria can colonize their guts. The results are published today (November 6) in Nature.

“This more intricate regulation of immune responses makes more sense than immaturity,” said Sing Sing Way, who led the study, “because it allows a protective response to be mounted if needed.” This may explain why newborn immune responses, though...

If the same suppressive cells are at work in humans, Way suggested that they might lead to new avenues for boosting immune responses in newborns, or making vaccines administered early on in life more effective.

The team began by injecting 6-day-old mice with splenocytes (a type of white blood cell) from adults. Newborn mice are normally 1,000 times more suspectible to bacterial infections than adults, but despite receiving working immune cells, they became no less vulnerable.

This is because some of the newborn splenocytes, which carry the CD71 protein on their surfaces, actively stifled their neighbors. When the team got rid of these cells, the remaining splenocytes became more active and started producing signalling molecules involved in immune responses.

When mice are a week old, they have plenty of these CD71+ cells, which make up two-thirds of their splenocytes. This population shrinks by 60 percent during their second week, and plummets to low adult levels by their third week. And as the cells disappear, the mice become better and better at warding off infectious bacteria.

But not all bacteria are problematic. Some gut bacteria play important roles in digestion, nutrient production, and safeguarding health. Way believes that newborns suffer a temporarily weakened immune system so that these beneficial bacteria can safely colonize their guts. When his team closed this window of opportunity by deleting the CD71+ cells, the bacterial settlers triggered extensive inflammation.

Way added that there might be other reasons why newborns should carry immunosuppressive cells. For example, they could stop a fetus’s immune system from attacking its mother’s cells while still in the womb—a possibility that the team is now following up on.

Although the immune system develops very differently in mice and humans, Way’s team showed that blood from human umbilical cords is also rich in CD71+ cells, which also seem to suppress the immune system.

Rick Blumberg, an immunologist at Brigham and Women’s Hospital in Boston, said that identifying the specific cells behind immune suppression is very important. “If you understand mechanisms, you have the opportunity to manipulate them,” he said. “What would happen if they transferred the fetal CD71+ cells to an adult environment? Could you use them for immune therapy?”

Way’s team also showed that CD71+ cells affect other immune cells through an enzyme called arginase, which metabolizes the amino acid arginine. Substances that block this enzyme could potentially boost an infant’s immune responses, although this would have to be done carefully, to avoid causing problems for the incipient gut microbes.

Baby formulas contain small amounts of arginine. Sidney Morris, a biochemist from the University of Pittsburgh, said that it may be important to avoid fortifying them with extra arginine, lest it swamps the arginase activity of CD71+ cells, releases the immune system, and causes problems for the developing infants’ guts.

Morris also noted that people who suffer physical traumas, and those with cancer, often have higher levels of arginase and weaker immune systems. “Whether the precise mechanism of immunosuppression is the same or different in each of these circumstances remains to be determined,” he said.

Correction (November 7): This article has been amended to clarify that arginine is an ingredient in some baby formulas, and not a fortified addition as originally stated. The Scientist regrets the error.