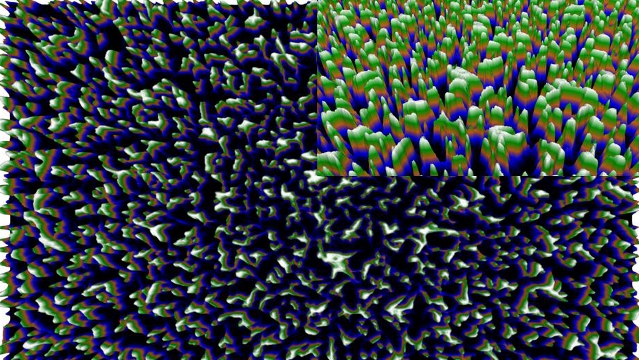 Diplacodes bipunctata dragonfly wings are covered by nanoscale pillars, which exhibit strong antibacterial activity.IVANOVA ET AL.The material: Black silicon, a synthetic material studded with needle-shaped nanostructures that is used primarily for sensor applications, serves as a potent antibacterial agent, killing some 450,000 cells per minute in just one square centimeter, according to a study published today (November 26) in Nature Communications.

“If it’s manufacturable, if it’s transferable to other surfaces and fabrics, it could be a major breakthrough,” said Stephen Kelly, a nanoparticle researcher at the U.K.’s University of Hull who was not involved in the research. “It’s interesting in itself in that it clarifies that you can have mechanical effects to kill bacteria, but more importantly, it offers the potential for antibacterial surfaces which will kill a whole range of different kinds of bugs.”

What’s new: Nanoparticles with antimicrobial effects have long been used to...

Now, microbiologist Elena Ivanova of Swinburne University of Technology in Australia and her colleagues have shown that certain nanostructures can indeed kill based on texture alone. The group had previously demonstrated that cicada wings (Psaltoda claripennis), which are covered in dense nanopillar structures, were highly lethal to the opportunistic human pathogen Pseudomonas aeruginosa, and provided evidence to suggest that the wings’ biochemical properties were not responsible. “We showed that bactericidal nature of the wing is due to the mechanical rapture of bacterial cells,” Ivanova told The Scientist in an e-mail. 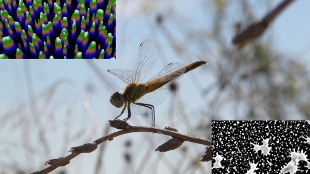 The sophisticated nanomorphology of dragonfly wings (top left) and that of a synthetic homologue, photovoltaic black silicon (bottom right), are capable of killing bacterial cells on contact. IVANOVA ET AL.Recognizing that dragonflies (Diplacodes bipunctata) also have similar nanopillars on their wings, and that black silicon was known for a similar nano-texture, Ivanova and her colleagues decided to explore the bactericidal potential of the two surfaces. Sure enough, both caused significant deformation of the cell walls of P. aeruginosa, Staphylococcus aureus, and Bacillus subtilis, and even killed B. subtilis spores—at rates more than sufficient to stave off the bacteria. “[They] provided potent bactericidal activity against not only Gram-negative bacteria but also against the more rigid and lysis-resistant Gram-positive bacteria and their spores,” Ivanova said.

“This [study] seems to state clearly that this is a mechanical effect and that you can have a very efficient antibacterial effect of a surface, which is just based on deformation of the cell wall, just stressing the cell well,” Kelly said. “It’s really novel.”

Importance: In the face of ever-evolving multidrug-resistant microbes, and with an insufficient antibiotic pipeline, an antibacterial surface could be just what the doctor ordered. “This opens the avenue of developing surfaces which have very strong antibacterial effects to kill of bacteria which are becoming resistant to all the known antibacterial agents,” said Kelly, who suspects it would be difficult for bacteria to evolve structural resistance to black silicon. “They would have to develop much thicker cell walls, which are flexible and permeable. That would be a real challenge.”

Furthermore, Kelly added, a synthetic surface has the advantage over antimicrobial nanoparticles in that it will not result in the release of nanoparticles into the environment. “Because you’re changing the surface, then it’s not getting into the ecosystem in any way.”

Needs improvement: The critical limitation to black silicon’s bacteria-fighting power is cost. The ion-beam technology used to make the material is “fairly expensive,” Kelly said, “and not generally applicable to common, cheap surfaces.” In contrast, the demand for new antimicrobial products “is a fairly low-cost, high-volume market,” he noted. “So I think manufacturability and scalability [are] the key questions.”

In the meantime, Ivanova and her colleagues “plan to explore a range of other materials [whose] surfaces maybe suitable for fabrication similar structural nano-patterns to create surfaces free from bacteria,” she said.