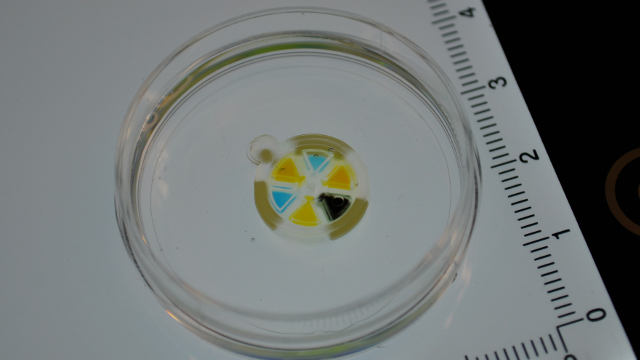 An implantable wheel-like hydrogel Geneva drive uses a motorized magnet to move independently. A Geneva drive is an intricate mechanism used in the mechanical watchmaking industry that allows precise, consistent movement.SAU YIN CHINThe approach: Researchers have devised a technique to produce implantable microdevices made entirely of biocompatible hydrogels, according to a study published this week (January 4) in Science Robotics. And they used one such device to effectively target chemotherapy directly to bone tumors in a mouse model of osteosarcoma.

“Traditional implantable devices are made of silicon or metal, and there are certain manufacturing processes that you would use to make devices out of those materials,” coauthor Samuel Sia of Columbia University in New York City told The Scientist. “But they don’t work on biological materials which are much softer, and so we had to develop our own methods.”

The significance: The authors worked with polyethylene glycol (PEG)–based hydrogels, which are biocompatible and can be biodegradable. The US Food and Drug Administration has already approved some PEG-based hydrogels for use in medical devices. Because the machines are made completely of hydrogels, they avoid the toxicity risk associated with implantable devices that contain silicon or heavy metals.

“Of course, you have other devices that are also made out of biocompatible materials, but those are mostly passive devices,” said Albert van den Berg of the University of Twente in the Netherlands, who was not involved in the study. “For instance, you can implant tiny polymer sticks, which have drugs inside that diffuse to the outside, but [in this study] these are active, commandable devices. It’s really a breakthrough.”

Needs improvement: Because the movement of an external magnet controls the microdevices, they contain no wires or batteries, said coauthor Sau Yin Chin of the Agency for Science Technology and Research in Singapore. This characteristic is “a plus,” since it is those components that make other implantable devices less safe, she added. But the magnet must be strong and be within a centimeter or two in order to actuate the device.

This distance worked well for this study’s mouse osteosarcoma model, as bone tumors generally arise close to the skin. The researchers embedded the devices subcutaneously, which resulted in death of tumor cells upon device administration of a dose of the chemotherapy drug that was much lower—and thus less toxic—than the typical systemic dose. In a scenario where the site of drug delivery was further from the surface of the body, the current devices would likely not function as well, the authors noted.

The magnetic actuation of the devices raised other questions for Rienk Eelkema of the Delft University of Technology in the Netherlands, who was not involved in the study. “Let’s say that you have a patient with multiple devices, is that going to work?” Eelkema asked. “Let’s say that a patient that walks around with such a device encounters a magnet somewhere. Is this a big problem?”

Chin said she would like to see modifications to the devices that would allow the delivery of lyophilized drugs. The chemotherapy drug used in this study was in solution, so some drug was released when the device was not actuated because the hydrogel layers move and have small gaps. Drugs in solution may also be less stable, which could impact their efficacy, she noted. 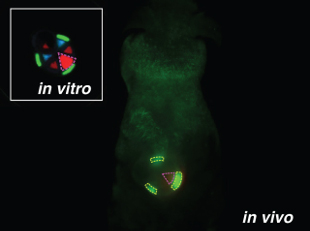 A Geneva drive loaded with chemotherapy medication and fluorescent beads was implanted in mouse models of bone cancer, where it effectively delivered the treatment at a controllable pace.S.Y. CHIN ET AL., SCI. ROBOT. 2, EAAH6451

The future: Despite open questions about the devices in their current forms, van den Berg said that this manufacturing strategy could enable the creation of other active devices, such as a biocompatible insulin pump.

Down the line, Sia and colleagues would like to investigate the possibility of using their strategy to manufacture implantable, biocompatible microdevices that could repair tissue or destroy cancer cells.

“What we have is not just a drug-delivery system,” he said. “We did a proof-of-concept [study] with this bone cancer model in a mouse for drug delivery, which I’m pretty excited about, but I think the potential is much broader than that.”