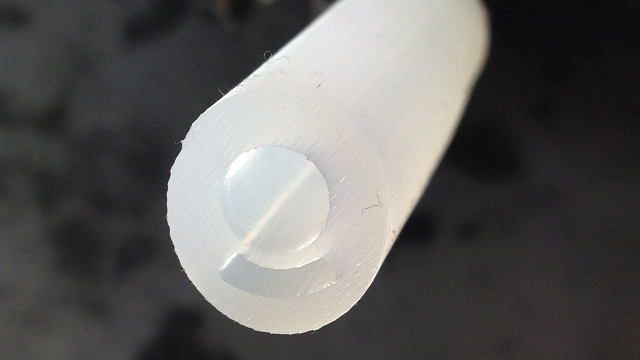 An unfinished sample featuring the additional channel that can be inflated to dislodge biofilms.VRAD LEVERINGThe device: Researchers at Duke University in Durham, North Carolina, have developed an early prototype of a new urinary catheter that flushes stubborn bacterial biofilms from the main drainage tube on demand.

In patients using long-term urinary catheters, bacterial biofilms can block urine flow and harbor pathogens that cause urinary tract infections (UTIs). But the new design, described this week in Advanced Healthcare Materials (March 25), provides a clever solution: a separate channel running alongside the main drainage tract that can be inflated with saline or air, which stretches and deforms the inner surface of the main tract and, as a result, dislodges the biofilm.

“Think of the biofilm as a city that bacteria build to protect themselves,” explained study coauthor Vrad Levering, a graduate student in biomedical engineering. “What we’re doing is...

Levering and his supervisor, Gabriel Lopez, showed that a problematic crystalline biofilm produced by Proteus mirabilis could be detached from a flat silicone surface by stretching it with a certain amount of force. They teamed up with mechanical engineers Xuanhe Zhao and Qiming Wang to produce a length of silicone tube that applies the same principle, incorporating a thin extra channel that can be inflated via a small syringe. In lab tests, repeated inflations broke up 90 percent of biofilm on the inside surface directly above the channel, and its remnants were easily washed away.

What’s new: Using mechanical force to break up biofilms in catheters is a novel approach, said David Stickler, who worked on biofilm-caused catheter blockages at Cardiff University in the U.K. “Previous attempts [to prevent biofilms] have focused on impregnating or coating catheters with antibiotics and other antibacterial agents, but they have all failed,” Stickler told The Scientist in an e-mail. “Physical methods are much more effective, and they will not be neutralized by the ability of bacteria to develop resistance.”

Dimitri Drekonja, an infectious diseases specialist at Minneapolis VA Medical Center, was also impressed. “The approach is interesting because it removes existing biofilms, and it’s something that can probably be done by the patient at home,” he said.

The significance: “The crystalline bacterial biofilms that can develop on long-term indwelling catheters seriously complicate the care of many elderly and disabled patients,” said Stickler. About half of all patients with long-term catheters experience the problem. But apart from replacing blocked catheters, there is little that patients and healthcare workers can do, he added.

A subset of users suffers from particularly severe biofilm buildup, resulting in regular blockages. In some cases, said Levering, patients resort to their own methods, such as using bicycle pumps to try to dislodge blockages. “This [new device] could be transformative for those people,” said Levering.

UTIs account for 40 percent of all hospital-acquired infections annually, and 80 percent of those are associated with urinary catheters. Asymptomatic biofilms can promote them by harboring harmful bacteria. “By disrupting biofilms on a regular basis, we could potentially halt the progression to infection,” said Levering. “If it works out, it’s a really big win: if we can reduce the number of CAUTIs, we could really improve people’s lives and save a lot of money.”

Drekonja agreed that the design could be useful for preventing encrustation but suggested that it’s a “big leap” to say it would significantly reduce CAUTIs. “For most CAUTIs, you can’t conclude that if only there was no biofilm, you would have no infection,” he said, because infection-causing bacteria can live in tiny kinks in the catheter’s surfaces. And the prototype didn’t clear all traces of biofilm. “A thin, non-obstructive layer can still harbor bacteria,” Drekonja said.

Needs improvement: The existing model is but a section of silicon tubing, so the researchers will next create a full prototype based on the new design. “We want to create prototypes with multiple inflation chambers so we’re getting rid of biofilm from the whole circumference of the inner walls,” said Levering.

Stickler pointed out one potential problem. Urinary catheters have a set of eyeholes at the tip that sits in the bladder, and biofilms can form on the rims of these openings. “It is clear from the paper that their system is effective in clearing biofilm from the luminal surfaces of a tube,” said Stickler. “It is, however, difficult to see how it would prevent blockages at the eyeholes.”

The regulatory path to device approval should be relatively smooth, added Levering, because the new design can be made with the same materials as existing catheters, and does not include any chemical or biological agents.

“The next step should be to manufacture catheters incorporating their design and examine their performance in bladder models infected with Proteus,” said Stickler. “If they prove to be effective, then it would be worth proceeding to a clinical trial.”