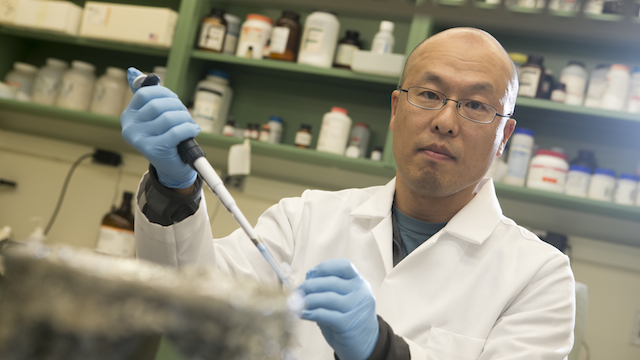 Nobuhide Ueki in the labSTONY BROOK UNIVERSITYThe drug: Researchers have found a new way to modify cell-killing agents to make them selectively poison cancer cells, while avoiding healthy cells, according to a paper published today (November 5) in Nature Communications. The researchers deactivated a toxic agent, puromycin, by adding an acetylated lysine residue to it. The resulting compound, called Boc-KAc-Puro, is a prodrug—the compound is biologically inactive until it interacts with enzymes produced by the cancer cells it targets. The proposed activating enzymes include histone deacetylases (HDACs) and the protease cathepsin L (CTSL), which are abundant in cancer cells. To activate the drug, the HDACs first deacetylate the lysine residue. Only after the deacetylation can CTSL remove the lysine from the puromycin, freeing it to kill any nearby cells by interrupting protein synthesis. The paper “introduces a clever way of ensuring the anticancer drug activates only in designated...

What’s new: Numerous tumor-targeting prodrugs are in development. But Boc-KAc-Puro is novel because it uses HDACs as triggering enzymes, and unleashing its toxicity involves two steps rather than one. “If you only have HDAC it won’t activate the drug,” said coauthor Nobuhide Ueki, a cancer biologist at Stony Brook University on Long Island, New York. “You need both HDAC and cathepsin L.” The two-step triggering process makes it less likely that a noncancer cell could unleash the drug’s toxicity. “Since the prodrug activates and demonstrates toxicity only after meeting the two unique enzymes in cancer cells, the system demonstrates increased specificity and safety compared to conventional prodrugs targeting a single enzyme,” said Lee. The researchers found that Boc-KAc-Puro was able to kill a variety of cancer cells in vitro, and reduce tumor growth in mice injected with human colon cancer cells. Meanwhile, noncancerous cells were significantly less affected, both in vitro and in the mice.

Importance: Cancer researchers aim to target malignant cells selectively while leaving healthy cells unharmed. But most cancer cells operate using the same set of enzymes and cellular machinery as normal cells, and drugs designed to kill cancer cells frequently harm normal cells as well. Much work has gone into creating prodrugs activated by proteases expressed at high levels in cancer cells, but these prodrugs are often unstable and become toxic in the presence of healthy cells. Additionally, researchers are working to slow cancerous growth by inhibiting HDACs. But HDAC inhibitors can also stymie the necessary work of the enzymes in normal cells. The technique Ueki and his colleagues describe could aid in the development of cancer drugs that kill more malignant cells and fewer benign ones. Ueki said that acetylated lysine could be added to a broad range of cancer-killing drugs. “We just proved one example by using puromycin,” he said. “Theoretically, we can use this small substrate to attach to other drugs to give them selectivity to tumors.” Ueki also hopes that the drug will work for diverse malignancies beyond colon cancer, since HDACs and CTSL are elevated in many types of cancer cells. Boc-KAc-Puro appeared to selectively kill pancreatic, cervical, and liver cancer cells in vitro.

Needs improvement: Ueki emphasized that much work needs to be done before Boc-KAc-Puro makes it to the clinic. He continues to make modifications to the prodrug to make it more cancer-cell selective. Additionally, “the system should be confirmed by treating animals when cancers reach a later stage or have spread in the body,” said Lee. Matthew Bogyo, a chemical biologist at Stanford University who was not involved in the study, questions how Boc-KAc-Puro is converted to puromycin, and how it achieves its selectivity. “I think it’s an interesting concept, but mechanistically it’s very unclear how the thing works,” he said. In particular, he noted that there is insufficient evidence to definitively say CTSL is cleaving lysine from puromycin. The authors made their case for CTSL’s role by producing fluorescent probes modified with lysine or acetylated lysine and using them to tag cancer cells. The probes fluoresced when exposed to the cancer cells, but in the presence of CTSL inhibitors, they showed little activity. The probes also showed little activity in noncancerous cells. Bogyo said that the inhibitors used in the study were not necessarily specific to CTSL and could have altered the activity of any number of proteases, though Ueki argued that two out of three inhibitors used had shown CTSL specificity in previous studies. Bogyo said that a more definitive way to test CTSL’s role in the unmasking of Boc-KAc-Puro would be to knock down CTSL genetically and see whether the drug’s toxicity was altered. Even so, Bogyo is convinced that Boc-KAc-Puro does somehow selectively kill cancer cells. “The bottom line is the drug does seem to have this targeted toxicity,” he said.