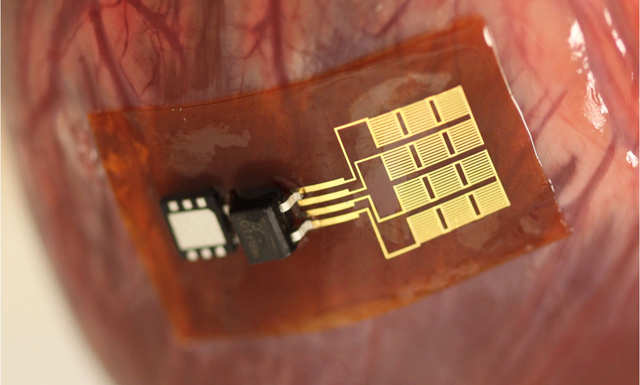 Mechanical energy harvester mounted on the bovine heartUNIVERSITY OF ILLINOIS AND UNVERSITY OF ARIZONAThe device: John Rogers, a professor of materials science and engineering at the University of Illinois at Urbana-Champaign, and his colleagues have constructed flexible energy-harvesting devices that can convert the movement of body parts—like the heart and lungs—into energy captured by a battery that could be used to power implantable devices like pacemakers. The devices, which are described in a paper published today (January 20) in PNAS, are constructed of thin ribbons of lead zirconate titanate (PZT) surrounded by flexible, biocompatible plastic, with an integrated rectifier and rechargeable battery.

“The heart is a great place to do mechanical energy harvesting because it’s constantly in motion. One of the challenges, though, with the heart, is that any constraint you apply to its natural motion by gluing a device onto its surface can cause all...

The researchers grew rat smooth muscle cells on the devices to make sure they were not toxic, and measured flexibility over 20 million cycles of mechanical testing. They showed that bending and unbending of the device generated enough energy to charge a 3.8-volt battery. The team attached the devices in vivo to the hearts, diaphragms, and lungs of cows, sheep, and pigs using sutures, and determined that movement of these organs was not disrupted by the device and could be converted to voltage when the chest cavities were both open and closed. In vivo, the devices generated enough energy to power a human pacemaker.

What’s new: “The innovation of this paper is taking what has been done on a small scale and integrating it up to a much more significant scale,” explained Michael McAlpine, a professor of mechanical engineering at Princeton University, who was not involved in the research. He added that integrating a battery to store power and showing the effectiveness of energy harvesting from multiple organs are also important steps forward from this research.

Importance: “A pacemaker runs off a battery and it’s installed in your body. Every time the battery dies, they actually have to open up your chest to replace the pacemaker completely,” said McAlpine. “If there was some way that you could . . . harvest power from [organ] motion, maybe you could prolong the life of the battery or even replace the battery all together.”

Amin Karami, an assistant professor of mechanical and aerospace engineering at SUNY Buffalo who did not participate in the work, said the applications of an energy-harvesting device extend could beyond pacemakers to any implantable medical device, including deep brain stimulators and cardiac defibrillators.

Needs improvement: Though the successful use of energy harvesting devices in human-scale animal models represents a huge step forward, clinical use is still likely several years away.

The device could process ample power, Karami said, “but there is room for improvement.” He pointed out that the mechanical deformation when the device buckles does have the possibility to generate more power. Karami also raised the issue of attachment in vivo. “It is kind of intrusive because they have to stitch something to the heart,” he explained.

And experts agree that, even though the PZT in this device is well encapsulated by biocompatible plastic, lead might still present a concern. “If there is a leak, then you are putting a poisonous material right next to the heart,” said Karami.

McAlpine said that using a different material could help ease concerns about lead’s bioincompatibility. “Some of the next-generation piezoelectrics that are coming out that are getting close to the efficiency of PZT, but do not contain any lead,” he said.

“We know we can generate power at a practical level. We know that these things can work on an animal model heart at the human scale without any problems,” said Rogers, but “the evaluations up to this point have not involved longterm studies.” He added that testing the longevity of the devices and their integration with the heart could reveal any deficiencies. “I don’t think we’ll see problems, but you have to go through that process to find out.”