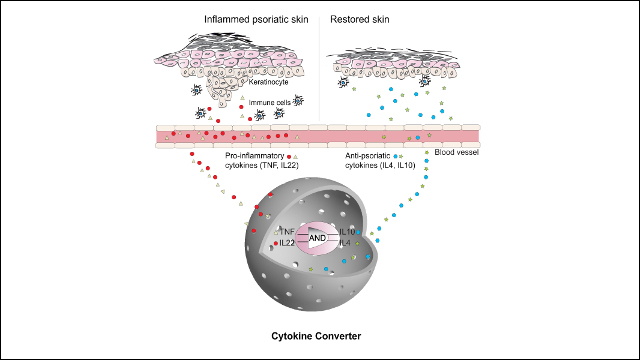 The designer cells detect pro-inflammatory cytokines from the psoriasis inflammation and release anti-inflammatory cytokines to reduce the skin reaction.SCHUKUR ET AL.The device: Psoriasis is a chronic skin condition that causes itchy, scaly lesions over parts of the body. Engineered “designer cells,” placed in microcapsules and implanted in mice, now offer hope for a psoriasis treatment that goes beyond daily pills and injections. Researchers from ETH Zürich in Switzerland described the cells’ daisy-chain detection of an oncoming flare-up and subsequent release of therapeutic compounds today (December 16) in Science Translational Medicine.

“The cell recognizes the disease metabolite and coordinates a specific response,” said study coauthor Martin Fussenegger, a bioengineer at ETH Zürich. “That leads to the production, secretion, and delivery of a therapeutic protein which goes back to the bloodstream.” The designer cells successfully prevented and treated the skin lesions in a mouse model of psoriasis.

The cells also function for a period of months. “Such adaptive therapies are distinctly different than small molecule and biologic drugs currently used, due to their self-regulating nature,” Timothy Lu, a synthetic biologist at MIT who was not involved with the work, wrote in an email to The Scientist.

What’s new: Fussenegger and his colleagues first engineered human embryonic kidney cells to detect TNF. If the cytokine was present and bound to a TNF receptor on the cell, it induced a signaling cascade that ultimately produced an IL22 receptor to detect this second cytokine. If both inflammatory compounds are present, the designer cells are programmed to kick into gear to release the anti-inflammatory cytokines IL4 and IL10. These anti-inflammatory proteins combat the psoriatic flare-up.

The two-step detection process is critical for complex diseases, said Fussenegger. “TNF is also released if you have a viral infection,” he noted. “In order to be specific for psoriasis, you need to have two cytokines circulating in the bloodstream.”

Fussenegger and his colleagues encased these cells in microcapsules—polysaccharide spheres 400 micrometers in diameter with 200 cells per capsule. The team injected the microcapsules into the murine peritoneum, where the capsules were vascularized and gained access to the animals’ bloodstreams. Using imiquimod cream, the researchers induced a psoriasis-like skin condition in the mice after injecting the microcapsules.

The engineered cells worked: mice that received the microcapsule implants before the induction of psoriasis did not display a reaction, while the control mice suffered skin rashes. When the microcapsules were implanted at a more acute phase of illness, three days after the imiquimod cream was applied, the skin reaction diminished after another two days. The encapsulated designer cells were also efficacious in human blood samples from four psoriasis patients, all of which contained pathological levels of the TNF and IL22 cytokines.

“This is a marvelous demonstration . . . as to how engineered cells can be designed to function as living diagnostics and living therapeutics,” James Collins, an MIT bioengineer who was not involved with the work, wrote in an email to The Scientist.

Needs improvement: After injection, the capsules are connected to the mouse’s vascular system. This process is necessary to deploy the therapeutic compounds into the bloodstream, said Fussenberger, but causes the capsules to clog up after two or three months and require replacement. “The capsules get placed in the peritoneum, so it shouldn’t be a big issue to replace them by a simple incision into the skin.”

Translating the results from this proof-of-concept mouse model into the clinic will require  interdisciplinary effort. “For us, it almost perfectly works in the mouse. But it’s almost impossible to predict how the system would transfer into a human being because it’s a completely different organism,” said Fussenberger. “We need to team up with medical doctors, we need investors, we need to produce the cells under good manufacturing process, and we need to get the procedure licensed . . . in order to start the first clinical trials.”