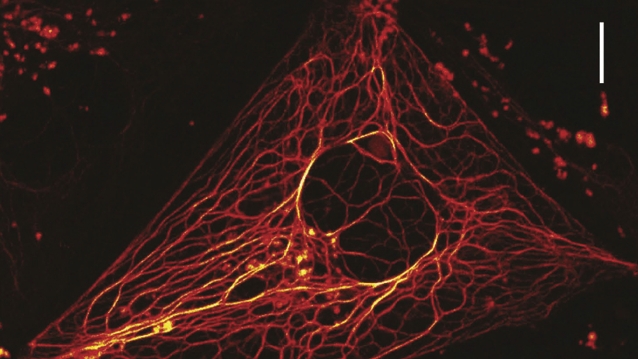 The new fluorescent probe, rsEGFP2, is based on an older version of EGFP able to switch reversibly between fluorescent and dark states, rsEGFP. The researchers, led by senior authors Stefan Hell and Stefan Jakobs at Max Planck, mutated only a few amino acids to produce an EGFP that switches more quickly than previous iterations. In a study published last December in eLife, they showed that the new fluorophore also lasts longer, resisting “photofatigue” that wears out fluorescent proteins and leaves them stuck in one state after too many rounds of...

Dynamic imaging of live cells is extremely important to understand their processes, explained Joerg Bewersdorf, a biophysicist at Yale University who was not involved in the research. But many small structures, like organelles, are very difficult to resolve using standard microscopy because they’re significantly smaller than visible light’s wavelength—making it impossible to focus an image using standard techniques. One strategy to increase a microscope’s resolving power, developed by Hell, is called stimulated emission depletion (STED).  In STED, one laser excites the fluorescent probes while a different laser, focused in a ring around the first, turns the other probes off, resulting in the fluorescence of only a few fluorophores around the area of interest, bring that part of the image into focus.

But STED requires extremely bright lasers to work, which can be very damaging to living cells. Switching to reversible fluorophores that can switch slowly between states allows dimmer lasers to be used—a technique known as RESOLFT (reversible saturable opticaL fluorescence transitions). By using long-lived reversible fluorophores, “we don’t have to hurry up with putting on photons,” explained Hell, so the technique “needs less light.”

What’s new: RESOLFT technology formed the basis of the original rsEGFP, but the protein switches between on and off states very slowly, noted Bewersdorf. Needing about an hour to take an image, it was “so slow there was no way to really use it in a general live cell setting where stuff is moving around,” he said.

In developing rsEFGP2, Hell and his colleagues optimized the RESOLFT strategy to allow researchers to take images up to 260 times faster, capturing the dynamic nature of a living cell—and making the notion of using RESOLFT to create video a future possibility, said Bewersdorf.

The importance: The ability to excite fluorophores at lower energy levels and switch quickly between on/off states should allow extremely high resolution imaging of dynamic processes in live cells without worry of damage.

The new GFP is a “tremendous advantage,” explained Dominique Bourgeois, a structural biologist at France’s National Center for Scientific Research who was not involved in the protein’s development. “It allows microscopy to go faster and get more dynamic pictures of what’s going on in living cells,” while reducing the amount of phototoxic light they’re exposed to, Bourgeois added.

The new technology could conceivably be used in a wide variety of applications, said Bewersdorf. Subcellular organelles like mitochondria, which are difficult to capture by microscopy because, at 250 nanometers, they’re smaller than the wavelength of light, could now be imaged in live cells, rather than the fixed cells necessary for electron microscopy, he predicted. Additionally, the faster imaging rate could make super high resolution videos a possibility.

Bourgeois envisions the new technology being applied to imaging miniscule dynamic interactions, like viruses entering host cells. Jakobs and Hell say that the dim lasers of RESOLFT will also enable them to visualize changeable interactions in vivo, such as the dynamics of developing neurons.

Needs improvement: Currently, the information gleaned from RESOLFT only amounts to only a single pixel. Jakobs and Hell have plans to create laser arrays that allow imaging of larger areas at once, however—up to 100 micron square regions.