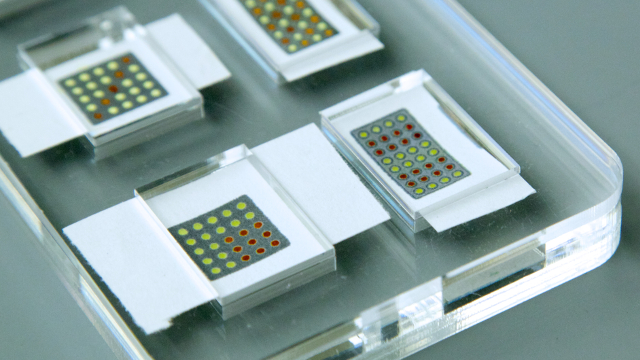 HARVARD'S WYSS INSTITUTEThe technique: Imagine pulling a small piece of paper out of your desk drawer, adding a drop of water, and within hours having a reconstituted biological system functioning on your benchtop. It turns out that such molecular magic might be possible, thanks to a new strategy to embed synthetic gene networks—built to detect the presence of glucose or a pathogen, say, or produce a protein of interest—on freeze-dried paper.

Boston University’s James Collins, an early leader in the field of synthetic biology, and his colleagues added all the necessary ingredients—transcription and translation enzymes, along with DNA encoding genes that dictated a particular function—onto a bit of paper, then freeze-dried it. Up to a year later, the synthetic gene network could be rehydrated and kicked into gear.

“It turned out that this worked really well,” said Collins. “These samples would work as well as the fresh-from-frozen...

“I honestly didn’t think it was going to work,” said Keith Pardee, a postdoc in Collins’s Wyss Institute lab who led to work, which was published today (October 23) in Cell. “Our simplest system contains 35 proteins and the ribosomes, and I thought there’s just no way we’re going to be able to freeze-dry this and have each one of these proteins to come back at levels that are compatible enough to reconstitute transcription and translation. But I thought I just have to try because if it works it would be so cool. And it did.”

“This is one of the first examples [of] gene networks” on paper, agreed biomedical engineer Ali Yetisen of the University of Cambridge in the U.K. “This will be the highest profile paper coming up about paper-based [devices].”

But even more exciting to Collins was that the gene networks remained functional after being freeze-dried—a process that involves flash freezing the product in liquid nitrogen, then putting it into the freeze drier, which acts as a strong vacuum that sublimates the water from the sample. Such preservation could dramatically simplify shipping, distribution, and storage, he said. In addition to serving as a potential research and clinical tool, for example, the system may even find a place in education.

“I think a lot of people might be surprised that you can freeze-dry [gene networks],” said Church.

The significance: As proof of principle, Collins’s team created paper-based gene networks to detect RNA of antibiotic resistant bacteria and of two Ebola virus strains. In both cases, the researchers designed the gene networks to produce a visible color change.

“From the diagnostic end, a lot more work to be done before moving this into the field,” Collins cautioned, but he emphasized the broad utility of the technique: “We showed you could design outside the cell and test outside the cell on paper constructs a transcriptional cascade,” he said. “The intriguing thing was that it was done very quickly, over the course of just a few hours. Generally the building and spec-ing of the circuits will take many weeks to months.”

Needs improvement: For applications like diagnostics, being able to detect low concentrations of molecules is essential. In their paper, the researchers reported low nanomolar sensitivities, Collins noted. Since submitting its manuscript, however, the team has already made some improvements. “We’re now comfortably in the picomolar range, which is getting close to where you want to be,” he said, “but I think we’d like to be even lower.”