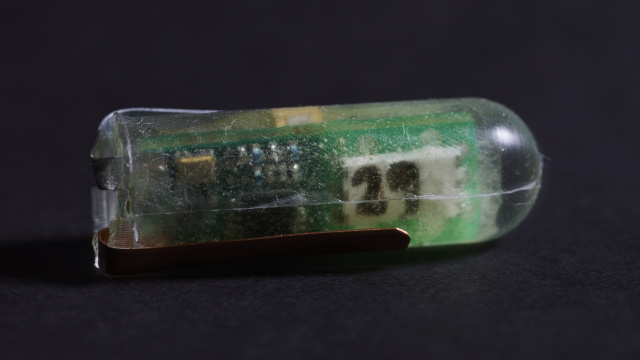 DIEMUT STREBEThe device: Researchers have developed an ingestible device that uses copper and zinc electrodes to harvest power from gastric fluid, according to a study published this week (February 6) in Nature Biomedical Engineering. They tested the capsule in pigs, whose gastrointestinal tracts are similar to humans.

This work shows “the feasibility of harvesting energy for several days from a large mammal that is ambulating and eating,” said coauthor Giovanni Traverso of Brigham and Women’s Hospital in Boston.

The power harvested by the device was sufficient to transmit measurements from an onboard temperature sensor to a receiver several meters away from the animals. “We can get relatively consistent power, enough to power temperature measurements on a minute by minute basis and transmit [them] wirelessly,” explained coauthor Phillip Nadeau of MIT.

The significance: The capsule was able to generate power from stomach acid for an average of six days—much...

The authors demonstrated that the device could not only harvest energy in the highly acidic stomach, but also harvested small amounts of energy in the small intestine, where the pH is closer to neutral. They used a version of the device to measure the power available in both the stomach and the small intestine, which should help researchers improve future ingestible electronics.

“This is very exciting work,” Hanqing Jiang of Arizona State University, who was not involved in the work, told The Scientist. “Zinc can react with both acid and base solutions, so in both environments, zinc can work to generate electricity,” he said.

Jiang added that the design of the capsule, where the zinc anode and copper cathode freely contact gastric fluid, is also advantageous because there is no danger of leakage. “Usually if you have a battery inside the body, you have to package the battery with certain materials that are inert and seal the electrodes and the electrolyte inside,” he explained. In that case, “you could potentially have leakage [of the] electrolyte into the human fluid, which is harmful or toxic.”

Needs improvement: The researchers built the device from commercially available parts, which resulted in a relatively large capsule, about the size of a triple A battery.

“I don’t think anyone would want to swallow” a 3.5 centimeter long, 1.2 cm in diameter capsule, said Nadeau. “It’s a mega pill, so the first step is obviously miniaturization.”

“A general question for anyone designing this class of devices [is] the tension between miniaturization and utility,” said Christopher Bettinger of Carnegie Mellon University in Pittsburgh, Pennsylvania, who was not involved in the work.

In the current study, the authors showed that the device could trigger drug delivery with harvested energy in an in vitro system. Bettinger said that using small devices for drug delivery could present challenges based on the amount of drug that can be loaded. And “microelectronic devices can get smaller and smaller, but there are thermodynamic limits to how small you can make a battery,” he noted.

The future: Nadeau said that building smaller capsules is achievable in the short term, and that the current measurements of potential energy in different segments of the gastrointestinal tract will inform the team’s design.

A related line of investigation is “trying to further define and optimize future electronic systems to really maximize how much energy is being harvested,” Traverso told The Scientist. The researchers will also further explore the safety of the capsules, he said.

Another goal of future work is adding different types of sensors, perhaps for pH and pressure. Capsules with more sophisticated sensing abilities could have health implications.

“Stomach ulcers can become cancerous,” said Sameer Sonkusale of Tufts University in Medford, Massachusetts, who did not participate in the work, “so if you put sensors in that can actually monitor how your gut lining is doing, then you might be able to prevent ulcers from becoming tumors and take preventive action.”