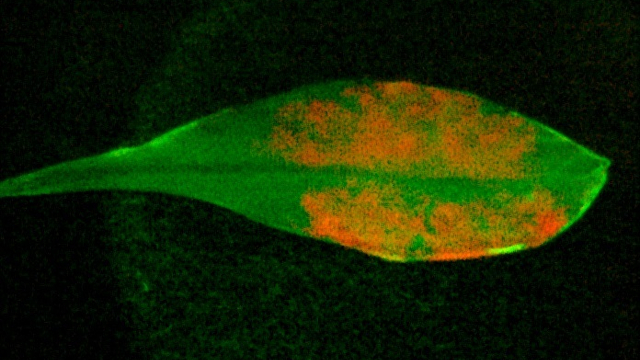 Near infrared flourescence imaging shows carbon nanotubes (orange) inside a leafJUAN PABLO GIRALDO AND NICOLE M. IVERSONThe technique: Researchers have boosted the photosynthetic activity of plants by delivering carbon nanotubes into chloroplasts, the plant-cell organelles that house the molecular machinery that converts solar energy into sugars.

A team led by Michael Strano, a chemical engineer at MIT, showed that single-walled carbon nanotubes (SWNTs) coated with single-stranded DNA infiltrate the lipid envelope of extracted plant chloroplasts and assemble alongside photosynthetic proteins. The same thing happened when the SWNTs were delivered into living Arabidopsis thaliana leaves through microscopic pores known as stomata.

The researchers then demonstrated that photosynthetic activity was more than three times higher in in chloroplasts containing SWNTs than in controls. While the precise mechanism is not entirely clear, the authors proposed that SWNTs increase the amount of light that is captured by photosynthetic molecules.

The significance: “We want to start a new field called plant nanobionics,” said Strano. “The idea is to merge nanomaterials with living plants to enhance their native functions and to give them non-native functions.”

Potentially, that could allow scientists to engineer faster-growing plants, he added, and plants that monitor pollution. And if researchers could engineer isolated chloroplasts to photosynthesize more effectively and last longer, they might be able to develop better solar energy-harvesting solutions.

“This study is the first step,” said Strano. “We’ve demonstrated the basic techniques you need to get these parts into the plants. There is still a lot of work to be done, but it opens the possibility that we could use this whole Lego set of nanoparticles, with all these different functions that you could mix and match to impart all kinds of different functions to the plant.”

Jong Hyun Choi, who studies bioengineering and nanotechnology at Purdue University in West Lafayette, Indiana, found the work impressive. “There have been a number of studies in the past that explored photosynthetic units and nanomaterials, [but] this study goes beyond what has been investigated,” he told The Scientist in an e-mail.

Plants can’t take up carbon nanotubes through their roots or stems because of filters designed to prevent the entry of anything that could clog up their vessels. But Strano’s team found that when A. thaliana leaves were placed under pressure from a nanoparticle-filled solution, the stomata took up the fluid. “I was shocked it worked so well,” said Strano. And the SWNTs used in the experiments did not seem to cause harm to the plants, he added.

Carbon nanotubes have a high affinity for lipids, which explains why they are attracted to the outer membranes of chloroplasts. In a process the researchers dubbed “lipid exchange envelope penetration,” lipids in the membrane grabbed the nanotubes and pulled them into the organelle, where they assembled close to the photosynthetic machinery. To explain this previously unknown pathway for material delivery into plant organelles, the authors suggested that the DNA coating on the nanotubes provides a charge that facilitates the process.

Needs improvement: There are several other outstanding questions, not least that of how nanoparticles augment photosynthesis. “We propose that there is enhanced absorption [of light] and then electron transfer from the carbon nanotubes into the photosynthetic machinery,” said Strano. The fact that metallic SWNTs—which are not semiconductors and therefore can’t convert light into electrons—did not enhance photosynthesis, lent some support to this idea. “But we don’t have direct evidence, so we need to do more work,” he added.

“I am less convinced that these particles actually help harvest light in such a way that photosynthetic electron transport is increased,” said Barry Bruce, a biochemist who studies applied photosynthesis at the University of Tennessee in Knoxville, in an e-mail. “It would be very helpful to see a more detailed in vitro study to investigate the mechanism of energy transfer since these particles absorb in the infrared [wavelength] and would require uphill energy transfer.”

Bruce also said that using cerium oxide to scavenge the ROS that might damage the proteins involved in photosynthesis is an interesting approach. “These novel nanobionic reagents represent a promising protective mechanism,” he said.

In addition, the researchers want to figure out which other nanoparticles may be safe for use in plants, and whether increased solar energy conversion actually translates to increased sugar production.

Choi said that the study demonstrates the proof-of-principle that nanoparticles can be incorporated into plants to augment existing functions and to add new ones. “A lot of work is needed to make this approach applicable in the real world,” he added. “But this work points in a direction that no one has shown before.”