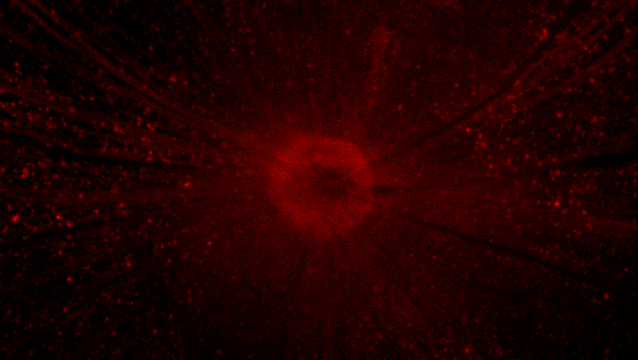 Flat-mounted rat retina at 50x magnificationWIKIMEDIA, MEMORY LAPSEThe compound: Richard Kramer from the University of California, Berkeley, and his colleagues have restored sight to blind mice using a small molecule called DENAQ, which, as a photoswitch chemical, changes conformation in response to light. In healthy mice, vision is a result of the conversion of light energy to electrical energy by specialized photoreceptor cells in the eye. These cells—rods and cones—perceive light and transmit visual information to the retinal ganglion cells (RGCs), which in turn communicate with the brain. Millions of people suffer from progressive degeneration of the rods and cones, which can lead to blindness, such as with diseases like retinitis pigmentosa. However, even after the rods and cones die, RGCs typically remain functional, so researchers have been searching for ways to manipulate them into photosensitivity.

Retinas with damaged rods and cones are subject to several morphological and biochemical changes, making them different from a healthy retina in more than one way. In this case, Kramer explained, their electrophysiology had been altered, resulting in DENAQ-mediated light activation of hyperpolarization-activated cyclic nucleotide-gated (HCN) channels. In the presence of DENAQ, these channels became responsive to both voltage and light intensity changes. “DENAQ tapped into these changes, [and] it was a nice accident,” he said.

Next, to determine whether these changes might confer light perception in diseased-retina mice, the team studied the light- and dark-condition movements of 20 animals administered intravitreal injections of DENAQ. The researchers found a significant increase in light-condition movement post-treatment. In separate tests on mutant mice, the researchers found that DENAQ-treated animals seemed to have better learned an association between light stimuli paired with an electric shock, as measured by their next-day behavioral responses, compared with their sham injection-treated counterparts.

What’s new: Before DENAQ, researchers had experimented with another photoswitch chemical called AAQ. But AAQ had several disadvantages. It is activated by UV light—which could damage living tissue on prolonged exposure—and has a short half-life—about 3.5 hours—which would necessitate frequent re-applications or injections. DENAQ, on the other hand, is stimulated in the visible range of light at around 450 nm to 500 nm and has a half-life of around two days. By comparing the retinas of DENAQ-injected and untreated healthy mice, the researchers did not find any signs of toxicity up to 30 days after treatment.

“[I am] excited to see what’s next from this group,” Steven Schwartz, a professor of opthalmology at the University of California, Los Angeles, who was not involved in the work, wrote in an e-mail to The Scientist. “It’s a complex, fascinating doorway that’s been opened.”

Importance: Most interventions designed to reverse photoreceptor degeneration, such as retinal transplants or the introduction of stem-cell derived photoreceptors, are intrusive and irreversible. “A chemical photoswitch is certainly more feasible—and perhaps attractive—than retinal transplants at this time. . . . In fact, some evidence exists that transplanted retinas are co-opted by the continuing retinal degeneration,” Bryan Jones from the University of Utah, who was not involved in the work, told The Scientist in an e-mail.

King-Wai Yau, a professor of neuroscience at the Johns Hopkins University School of Medicine in Baltimore, Maryland, explained that other groups had previously expressed the visual pigment melanopsin in RGCs, rendering them light-sensitive. However, the response was slow. “DENAQ and other related molecules that are being studied showed faster responses, which help,” Yau wrote in an e-mail.

Needs improvement: Changes to retinal processing could affect visual pathways in ways not yet explored. For example, Jones said that some gangliar cells that are not directly involved in visual perception may project onto other processes, like one’s sense of balance or circadian rhythm. “Can you imagine feeling constantly seasick because your retinal input to vestibular functions is altered?” he asked.

Human trials for DENAQ are still far off. “The next step would be studies on toxicity in other animals, biodistribution, [and] metabolism,” among others, said Kramer. Even so, said Schwartz, DENAQ treatment may be “an innovative potential work-around for eyes that have lost the capacity to sense photons on the photochemical and cellular levels.”