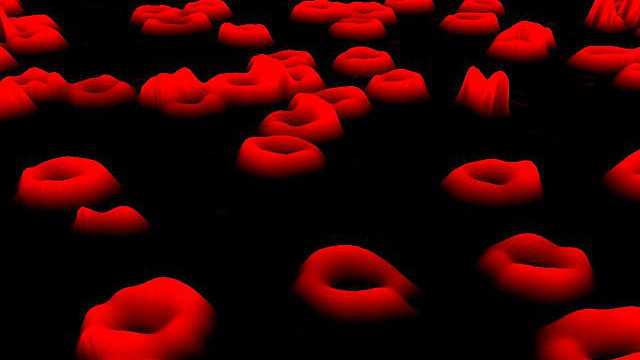 The process shields the cells from osmotic shock and lowers the glycerol concentration from 40 percent to 0.4 percent. More than 90 percent of the cells remain intact.

“I think exposing [red blood cells to glycerol] stepwise and smoothly as they did here is a very great approach,” said Utkan Demirci, a bioengineer at Stanford University School of Medicine who was not involved in the study. “This may pave the way for some automated systems in the future.”

“I basically recognized that red blood cells are known to be highly permeable to water and molecules like glycerol,” said Higgins. “Yet the current process for washing glycerol out of cryopreserved red blood cells required an hour, and it just didn’t seem like that made a whole lot of sense.”

If adapted for clinical use, the method developed by Higgins and Lusianti could change how blood is stored. Frozen blood can be preserved for 10 years, a vast improvement over the six-week shelf life of refrigerated blood supplies.

What’s new: A computer model allowed Lusianti and Higgins to predict how the volume of red blood cells would respond to changing concentrations of glycerol and sodium chloride, which constrained the rate of glycerol removal. “Because of the use of such a high glycerol concentration, it’s pretty easy to cause osmotic gradients that cause swelling or shrinkage” of the cells, said Higgins.

The researchers first tested the process by manually adding saline solutions to a small, continuously mixing volume of cells, and then constructed a microfluidic device to remove glycerol “conveniently and continuously,” said Higgins. The device has a pair of microchannels 50 or 130 microns wide, separated by the same type of membrane used in kidney dialysis. Red blood cells, which start out in a solution of 40 percent glycerol, are pumped through one of the channels at a rate of about 4 centimeters per second. The microchannel on the other side of the membrane is filled with 5 percent saline, which is gradually decreased to 0.9 percent.

Needs improvement: To achieve a typical blood transfusion flow rate of 4 milliliters per minute would require about 480 parallel microchannels. Higgins and his colleagues plan to work with engineers who specialize in arrayed microfluidics to design a scaled-up device. Another concern is the adequate removal of damaged blood cells from the system, said Higgins.

According the Demirci, glycerol toxicity remains an issue—safer cryoprotectants, he said, could further advance the practice of blood banking. (Demirci and his colleagues have investigated the cryoprotective properties of ectoine, an osmoprotectant molecule produced by bacteria that thrive in high-salt environments.)

Higgins said his group is looking into “a variety of other sexier microfluidic technologies that could potentially be applied to this problem as well,” but added that “the membrane-based device is a nice starting point because it’s pretty simple.”