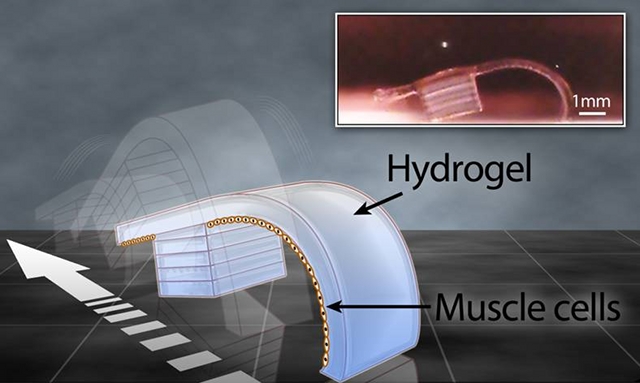 A caterpillar-like robot powered by cardiac cell contractions.Elise A. Corbin.

“The merger of tissue engineering and 3D printing is very exciting,” said Henry Hess, a biomedical engineer at Columbia University who was not involved with the project. 3D printing technology makes fabrication of biobots easy, precise, and reproducible, allowing researchers to concentrate on refining the engineering principles underlying successful biobot design.

In order to make their caterpillar-like biological machine, Rashid Bashir and his colleagues at the University of Illinois at Urbana-Champaign used a 3D printer to lay down thin layers of polymer, similar to contact lens material,...

They tested several designs of varying polymer thickness and leg length, which altered how much the force of the beating cardiac cells curled the legs, pulling them away from the surface. Some biobots had legs that couldn’t reach the ground, while others had legs that didn’t release surface tension enough to step forward. The answer came in the form of an asymmetrical design—with one long leg and one short—that resulted in just the right change in adhesion to allow the bots to move forward, said Bashir.

The successful robot, about half a centimeter long, is able to crawl at about a centimeter per minute. “We’ve had [the biobots] going for days to weeks,” as long as the cardiomyocytes can extract nutrients from the liquid medium through which the biobots walk, said Bashir.

What’s New: Though Bashir’s group is not the first to use cardiomyocytes to power tiny biobots, this is the first time scientists have employed 3D printing to facilitate biobot design, said Hess. This technology enables the researchers to predictably create biobots of the right size and shape, which is subject to very specific forces from the cardiac cells, said Bashir.

Importance: Though biobot technology is still in its early days, researchers hope to use biologically-based robots in many future applications, such as sensing and attacking a tumor, or monitoring cancer cells in a patient’s blood, said Roger Kamm, a biological engineer at Massachusetts Institute of Technology who was not involved in the project.

Bashir imagines that his little caterpillar biobots might be able to screen for and target toxins in the environment. He imagines that they could someday be used as biodegradable toxin sensors, able to move toward higher concentrations of water toxins and release neutralizing chemicals to tackle the problem.

Needs Improvement: The current biobots are merely a proof of principle. Though they now can move for weeks while in nutrient-rich media, increasing their size and capabilities or transporting them to toxic environments will require making them less reliant on their environment and more resistant to it, said Kamm. Others in the National Science Foundation-funded collaboration that supported the current research, called Emergent Behavior of Integrated Cellular Systems, are working on microfluidic devices that could provide nutrients to cardiac cells in bigger biobots. Kamm also envisions future bots utilizing many different types of cells: cardiac cells might still provide movement, but perhaps insect cells could be used to create a tough exoskeleton, or plant cells could extract solar energy.

A great challenge will be to create biobots that “live” longer than one cardiomyocyte division, said Hess. “One vision of course is to generate a truly living structure,” he explained. “It could live for 80 years in the same way that a human heart turns over components and lasts for a long time.”

But small steps come first. Now that they’ve demonstrated some guiding principles for their design, Bashir and his colleagues plan to design biological machines that can change direction and climb stairs.