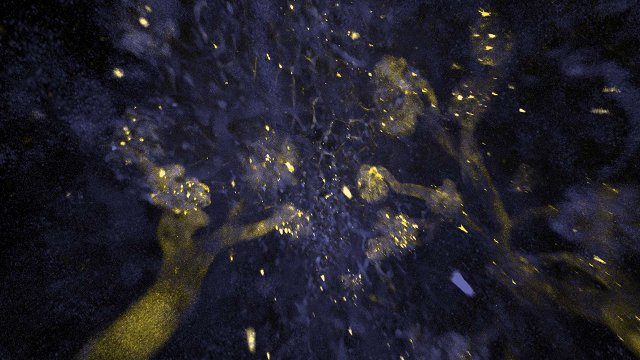 3-D visualisation of kidney from a transparent mouseBIN YANG AND VIVIANA GRADINARUThe technique: Pumping tissue-clearing reagents through an animal’s circulatory system removes lipids and leaves the remaining tissues practically see-through, according to a paper published today (July 31) in Cell. The new method, which builds upon previous tissue-clearing techniques, enables 3-D visualization of cellular structures and connections throughout the body.

“This is a paper that develops the CLARITY technology to the next level,” said Karl Deisseroth, a professor of bioengineering at Stanford University in California. Deisseroth was not involved in the new research, but developed the tissue-clearing method CLARITY upon which the new technique is based. “The published passive clearing methods were pretty good for whole adult mammalian organs,” he said, “but this really enables the whole body, or whole embryo [to be imaged].”

The history: There are countless reasons why scientists and clinicians would want...

To bypass this problem, researchers sliced extremely thin sections of tissue for imaging. However, this results in a loss of information about 3-D tissue organization, said Guangping Gao, a professor of microbiology and physiology at the University of Massachusetts Medical School who was not involved in the study. “You can only paste pieces together . . . you cannot see the global distribution,” he said.

In recent years, a number of tissue-clearing methods have been developed aimed at removing lipids and allowing greater visibility in thick tissues. While most of the methods require proteins of interest to be transgenically expressed as fluorescent fusion proteins prior to tissue-clearing, CLARITY allows researchers to use labeled antibodies or nucleic acid probes after the tissue has been cleared. This has increased the versatility of tissue-clearing, said Deisseroth, but there was still a limit to the size of tissues that could be analyzed.

What’s new: “The concept of whole-body interrogation is an idea that may have been ingrained in early 2000 after I visited a Body Worlds exhibit at the California Science Center,” said Gradinaru. “The idea just sat shimmering, I guess,” she said. “It needed the incremental steps and developments until it took the shape that is in the paper.” Body Worlds is an exhibition of human and animal bodies that have been perfused with plastic for preservation. Gradinaru’s new technique for whole-body tissue-clearing is called perfusion assisted agent release in situ (PARS). In essence, the tissue-clearing reagents are continuously pumped through the animal’s circulatory system—or, in the case of the brain, through the cerebrospinal fluid channels—where they gradually perfuse the tissues. Using PARS, Gradinaru has created almost entirely see-though mice and mouse organs, which she has probed with fluorescent antibodies to reveal individual cells and structures.

The significance: “This is a very significant technical advance,” said Gao, who develops adenovirus-associated vectors for gene therapy. Among the many possible applications, he said, “this method will enable us, potentially, to look at how viruses cross the vasculature and enter the cells, and . . . how do the host cells and host system interact with viral vectors.”

In addition to body-wide virus tracking, Gradinaru suggested the technique would be especially useful for observing neurons that stretch long distances in the body. “One potential use of our method would be to facilitate mapping of the peripheral nervous system,” she said.

Needs improvement: Gradinaru pointed out that although DNA, RNA, and proteins can all be imaged at once, “antibody diffusion is still a limiting factor.” Researchers who wish to use the technique, she said, “would be better off using smaller markers if available for their application . . . for example, nanobodies or monobodies.”

But the biggest limitation, said Deisseroth, is the data-handling problem. “You’re into terabyte data already from one sample, and the problem is not just storage . . . but how do you study it, manipulate it, and . . . share it.” In short, he said, computers have yet to catch up.