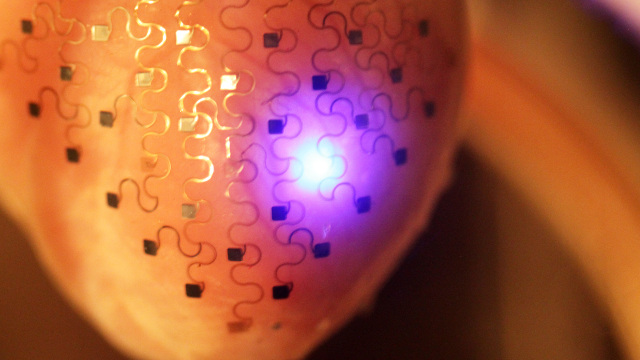 A sensor-packed membrane fitted on an isolated rabbit heart.JOHN ROGERS ET ALThe device: John Rogers from the University of Illinois at Urbana-Champaign and his colleagues have created an elasticated, sensor-packed silicon membrane that fits snugly around a removed-but-still-beating rabbit heart and monitors various markers of cardiac health.

The tailor-made sheath, which is described in a paper published today (February 25) in Nature Communications, contains an array of sensors that can measure not just electrical activity, but also mechanical strain, temperature, and pH. The membrane also contains actuators for electrical, thermal, and optical stimulation.

Rogers and his collaborators previously made stretchy sensor patches that can be applied to...

“The membrane is a little bit smaller than the heart, so you have to stretch it to slip it on,” Rogers explained. “That’s important because you need some pressure to achieve good contact with the heart surface, but not so much that it restricts function.”

When the researchers tested the membrane on a still-beating rabbit heart in a perfusion chamber, it did not interfere with pumping ability and it performed well compared with standard lab-based monitoring tools. The device successfully measured heart rhythm, for example, as well as real-time changes in pH during restriction of bloody supply and temperature fluctuations resulting from localized burns during experimental cardiac ablation.

The innovation: “What’s new and impressive here is that they’ve integrated a number of different functionalities into a membrane that covers the entire surface of the heart,” said Michael McAlpine, a mechanical engineer at Princeton University who was not involved in the research. That spread of sensors provides a high level of spatial resolution for cardiac monitoring and offers more control when it comes to stimulation.

“The other innovation is the use of a replica of the heart to precisely tailor the shape of the membrane,” McAlpine added. “That opens up new functionality possibilities, because you have sensors in contact with the entire surface [of the organ].”

The significance: The work represents a proof of principle. “We’ve demonstrated strategies for incorporating onto the outside surface of the heart all sorts of sensors and actuators that could have broad utility in cardiology,” said Rogers. But the researchers also had specific clinical applications in mind. They proposed that their membranes could replace current implantable defibrillators and pacemakers, for example, which are comparatively less sensitive when it comes to reading cardiac activity.

Defibrillators typically position one electrode in contact with heart. That’s how they detect potentially life-threatening arrhythmias before delivering a strong electrical shock to restore a safe rhythm. But the electrodes often detect signals from another part of the heart, Efimov noted, leading to unnecessary painful shocks. With dozens or even hundreds of electrodes in contact with the entire heart, however, the new membranes could provide more accurate readings of heart rhythms and better-targeted stimulation. The same could be true for pacemakers.

Efimov added that the inclusion of pH sensors means that such membranes could be used to predict sudden cardiac arrest. That’s because pH is an indicator of ischemia, or reduced blood flow, which often precedes heart attack. “These are still prototypes,” said Efimov, “but it’s difficult to overestimate the potential.”

Needs improvement: Rogers and his colleagues must first show that the membranes can work in vivo. That presents some obvious engineering challenges: how to integrate power supply and transmit information wirelessly.

McAlpine suggested integrating piezoelectric materials to convert the mechanical motion of heart into electrical power. At the moment such energy-harvesting devices cannot produce enough power for certain components. But McAlpine said he expects them to improve over the next few years. Until then, Rogers added, the same batteries used in conventional pacemakers might do the job.

Data transfer should not be too difficult either, McAlpine said. “If you want to monitor something continuously, you would probably have to wear something on your chest,” he explained. “Or maybe you could have built-in memory storage, so you would only have to transfer information once a day.”

Rogers pointed out that there are also biological considerations when fitting the membrane to a heart in a chest as opposed to in vitro, such as how it might affect adjacent tissues and vice versa. “It’s hard to predict how those will play out until you try it,” he said.