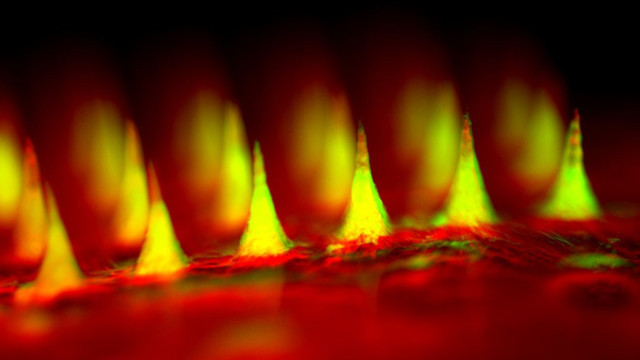 The device: A patch containing 121 microneedles loaded with specialized nanoparticles designed to release insulin when glucose levels are high could make insulin delivery a little bit “smarter,” according to a study published today (June 22) in PNAS.

“Our microneedles are smart microneedles. They can respond to glucose levels and respond at the right time,” said study coauthor Zhen Gu, a biochemical engineer at the University of North Carolina at Chapel Hill (UNC). “We are trying to mimic the function of the pancreatic beta cells,” which tightly control insulin levels in the body by keeping tabs on blood glucose concentrations.

Gu and his UNC and North Carolina State University colleagues demonstrated that the insulin-containing particles, which are exposed to blood capillaries when the microneedles puncture the skin, can change systemic insulin and glucose levels in mice. In a mouse model of type I diabetes, the patches...

The significance: About 400 million people worldwide have diabetes, meaning they either can’t make insulin (type I) or are insensitive to insulin (type II), a hormone that carries glucose into cells. “Insulin is like the key that opens the door,” said Gu.

Diabetics constantly have to monitor and regulate their insulin manually using glucose measurement devices and needles. Poor glucose control can lead to serious complications such as limb loss and organ failure. Gu said his team’s smart insulin patch is a step toward simplifying diabetes management by automating the process. “In a healthy body, when you eat something and the blood glucose goes up, the insulin can be released immediately,” he said.

What’s new: Although several other automatic insulin delivery systems, like mechanical pumps, already exist, this study is the first to combine a microneedle patch with a glucose-driven biochemical reaction to control insulin release. “It’s a different way of doing it,” said Michael German, clinical director of the Diabetes Center at the University of California San Francisco Medical Center who was not involved in the study.

Gu’s team packaged insulin within nanoparticles containing an enzyme called glucose oxidase, which becomes active in the presence of high glucose levels. They also fitted the lipids that make up the nanoparticle walls with a hydrophobic compound called 2-nitroimidazole, which becomes hydrophilic when oxygen levels are low. When glucose levels reach a critical level, the glucose oxidase begins consuming oxygen, creating a hypoxic local environment around the nanoparticles. This then triggers the 2-nitroimidazole to become hydrophilic, altering the nanoparticles’ conformation in a way that releases the insulin within.

Danny Chou, a biochemist at the University of Utah who has also worked on insulin patches, said the hypoxia approach overcomes some of the constraints that limited previous insulin patch designs, like depending on changes in pH levels. “It kind of opens up a new avenue,” he said.

Needs improvement: German said the smart insulin patch could definitely be part of a solution to better diabetes management, but it’s not the whole answer because it can’t sense changes in glucose and release insulin nearly as fast as pancreatic beta cells do. The nanoparticles, he said, respond to glucose levels so high that the sugar must have been on the rise for several minutes, whereas beta cells release insulin following very small changes in glucose concentration. Beta cells also receive many other signals that indicate, for example, when a meal is coming, so that they can start releasing just the right amount of insulin before glucose has a chance to spike.

“If it was just a matter of knowing what the current concentration was and matching it, we would have had this problem solved a long time ago,” he said. “My patients are smarter than smart insulins, and they still can’t match insulin to glucose with perfect timing.”

But, he said, smart insulin pumps and patches could certainly help diabetics if they can be equipped to respond to glucose levels as they are changing rather than after they have already reached a critically high threshold.

Gu said his team next plans to test their smart insulin in pigs, whose skin is similar to humans and which are big enough to assess how well the patch may be able to regulate systemic insulin and glucose in humans.